Example – Playing In The Shadows 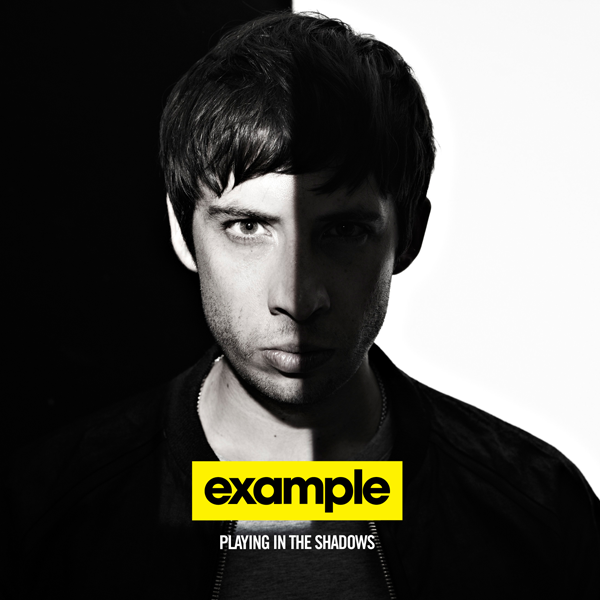 With more producers than you could shake an entire rainforest at, Example’s second album is no doubt a sleek, slick affair that while not the stellar outing that truly breaks the mould, definitely pushes many of the right buttons and causes some structural damage to any constraints.

Opener ‘Skies Don’t Lie’ is a catchy, grinding cut of dance with some lyrical clumsiness but an overall undeniable charisma that permeates its gritty synths and languid yet aggressive vocals. Structure-wise, it coils in smart ways that keep the listeners on their toes, whereas the simple hooks and bouncing rhythms mean that it is great club fodder, bridging the bedroom and the dancefloor well. ‘Stay Awake’ has a slow burn buildup that lurches awkwardly into party synths that jar with the sombre seriousness of the verses, with the rapping garbling the words occasionally, a shame given this is a track Example is making a stab at polemic on. As a dance track, it isn’t unappealing, but unlike its predecessor doesn’t quite have enough sonic interest to hold a listener outside of the rave.

Thankfully, the dark emotional intensity of ‘Changed The Way You Kissed Me’ with its sprinting tempo and needling heartbreak transforms what could be a throwaway breakup track into something of a standout. The jittery loops sit alongside bleak grinding drones and sounds that build into what sounds like an overdriven electro outburst of paranoia and sadness. As for the title track ‘Playing In The Shadows’, it is a gothic (but never goth) mood built by twanging melody and searing, creeping synth growls as the insistent tone of the vocals bleed an electric atmosphere into every second, as a standout song that deserves its status as the title of the LP.

‘The Way’ and ‘Anything’ likewise take us on a more emotionally open path, with raw, impassioned vocals that bark out heartfelt lyrics. Unlikely to fill a bouncing club but highly likely to gratify anyone who buys the album in order to appreciate Example’s artistry – ‘The Way’ does unfortunately dip into a populist and unnecessary rap section whereas ‘Anything’ handles it better – but otherwise both manage to keep a level of earnestness that is hard to come by in the scene.

‘Natural Disaster’ again hybridises heartbreak and hard party sounds, and here the mood grows wearing, but the sound of the track itself with its intricate layers of melody breaking into heady hip hop and urbane glitchiness, and moments of lyrical brilliance. Unfortunately the scuzzy rap of ‘Never Had A Day’ falls flat. Its languid bleakness and pop hooks temper each other far too heavily to fully work as a low mood or a catchy number, and the glitchy tones of ‘Midnight Run’ somehow become dreary in conjunction with the slightly glib lyrics and flat delivery. There’s a level of awkwardness in ‘Microphone’, as its sentiment oozes too syrupy over the arena-sized melody, but the childlike sweetness and clear-minded lyricism give the track an appealing earnestness and in a similar way, the bravado of ‘Wrong In The Head’ should grate, but there’s a level of cool and wry humour in it that makes Example too human to really resent.

The bonus tracks here are in actual fact worth contenders. The pseudo-classical grandiose piano R&B pop of ‘Lying To Yourself’ is a surprising stripped-down track that shows Example can singer-songwriter with the best of them, and ‘Shot Yourself In The Foot Again’ is a bile-flecked slow house/dub grinder of a track that unfurls in a tortured, compelling roar.

Overall, ‘Playing In The Shadows’ is patchy. The good parts stand out as illuminating windows into why dance music holds such a wide appeal in the mainstream, but the low points draw the curtains and skulk in the back of a darkened room with assorted substances and a haze of inaccessibility. I wouldn’t laud it as heavily as its press release would like, but Example has managed to hold this greasy little rocker’s ears for an album’s worth and even wrung enjoyment and emotion via this set of tracks, and if that’s not some kind of recommendation, I don’t know what is.