MR WHO – ‘GET ON IT’ (feat. Alex Martin, Craftz and Frostar) 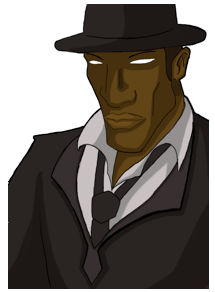 ** Jonathan Ross, Tinie Tempah, and writer of the Kick Ass film, Mark Millar
are amongst the fans of this unique animated project – MR WHO **

MISTER WHO -Get on it- feat. Alex Martin, Craftz, Frostar from Tayo Olarewaju on Vimeo.

Mr Who ‘Get On It’ by vision music promotions

Mister Who is the latest animated character to hit the scene since the Gorillaz first arrived. Created by The Dual Amp brothers, Mister Who is not a band, he’s a vigilante. The music and animated videos are audio-visual soundtracks to the character’s life and experiences, as he tackles the tough streets of London. Each release is accompanied by the Mister Who Comic. The debut track ‘Get on it’, is a slice of frenetic electro hip hop, written and co-produced by The Dual Amp brothers and drum‘n’bass legend, Matrix. (Hospital Records) The track also features the underground rapping talents of Craftz and Frostar as well as the soulful voice of Alex Martin. The track ‘Get on it’ with downloadable e-comic will be released on ITunes in October 2011.

Mister Who prowls the streets whilst we’re sleeping. He follows the tracks of tears, London rain, his city weeping. He has a debt to pay, a promise he made which he plans on keeping. Instinct guides his every decision, guided by a faith but you’ll be guessing a long time if that guess is religion. Hero or Villain. Friend or Foe. Karma is the mist that creeps through his soul. When you’re engulfed in the mist, almost kissed as it blows, Mister Who will be a name that you’ll soon come to know.

Rasheed and Tayo are in fact cousins. Rasheed is responsible for song writing, soundtracks and script writing and Tayo is in charge of the illustrating and animating. Creatively they are The Dual Amp brothers.
Up until 2009, Rasheed made tracks under the name Mister Who, managed by Tinie Tempah’s Disturbing London management. (See Walk Away video feat Tinie Tempah on www.misterwho.co.uk) However, when he started getting into screenwriting and film he felt the natural progression for the project lay away from the confines of a conventional music artist. Time to explore 21st Century multimedia.

Tayo, was working for Manga UK at the time and the pair talked about setting up a company to showcase their animated music videos, comics, beats and scripts. Complete control. No filter. Rasheed teamed up with his writing partner, Paul Stokes to form Tek 2 and write the Mister Who comics. In August 2010, Tayo and Rasheed formed Dual Amp ltd.
Influenced by the creative spirit of Gorillaz, Jim Lee, OFWGKTA and Manga. They thought the time right to add their own take on DIY 21st Century urban art. Dominic Jones of Proper music distribution, offered a distribution deal to Dual Amp after one meeting once hearing the scope of the plans.

Proper distribution are the uk’s biggest independent distributor. Dual Amp Music have joined the likes of Damon Albarn’s ‘Honest Jon’s’ imprint and Mumford and Sons own Communion label on the roster. Mister Who is the first project to come from the Dual Amp imprint with more interesting projects to follow.
There are also plans to create a Mister Who visual sound system for live shows. This will not be ready until late 2012.
In the meantime The Dual Amp brothers will be interacting directly with fans at comic events and clubs where they offer exclusive signings of their Mister Who comic and cd. Plus their workshops, where they go into inner city schools and highlight the creative skills needed to create a comic and cartoon.

The Rifles new video for ‘Tangled Up in Love’ single, out 25th Sept

The Good Natured announce Video for ‘Skeleton’, the Lead Single from... 28 April 2011 | aaamusic