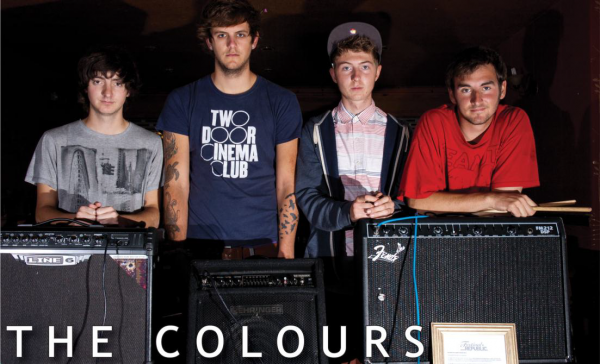 The Colours Announce New Record Label
The Colours can announce that they have signed to independent record label, Hey Bert Records.

The Blackpool based quartet have become a
dominant feature in the Lancashire music scene, with them performing numerous dates across the North-West region – including success in a recent ‘Battle Of The Bands’ competition.

Jake Powell, vocalist for The Colours, states “the North-West hasn’t influenced me as greatly as everyone would expect, with my only real Lancashire based influences coming from Delphic and Chapel Club. The current scene seems to be majorly southern sounding, with the likes of Wolf Gang, who I recently saw a documentary about, finding a lot of mainstream success”.

“I feel working alongside Hey Bert Records has helped increase our potential. The band no longer feels dependent on me or another member having to arrange everything. It seems being with Hey Bert, we feel more of a team. The main importance at the moment is getting these new tracks recorded and exposing what the best of our ability, currently, is” Jake explains.

It is no surprise that their punchy vocals, melodic hooks and vibrant sounds have led to comparisons to Two Door Cinema Club, Funeral Party and Bombay Bicycle Club. One thing remains certain; The Colours is a name that will feature heavily in your playlist over the forthcoming months.

The Colours formed in early-2010, consisting of Jake Powell (Vocals/Guitar), Ben Swift (Bass) and Joe Packman (Drums), but earlier this year included Gerald Buckfield (Guitar/Percussion) to the line up.

Drummer, Joe Packman, mentions that “Gerald used to be our tech, with him being the only member of the band that has studied a music course. We felt a direction we wanted to go in, but couldn’t do that just as a three-piece, so his inclusion just seemed necessary. Thankfully he accepted, as it has helped us to indulge into newer sounds and experiment a little more”.

The Blackpool based quartet is currently allowing a FREE download of their demo tracks, ‘Olivia In India‘ and ‘Everyone Complains, Nothing’s Granted‘, which is available at: http://www.heybert.co.uk/thecolours.

“The release is just to illustrate the direction we’re heading and to inform fans that we haven’t just drifted off the radar. It’s the newest and, personally, our best stuff. We just hope it’s to everyone else’s liking” Joe adds.

For more information about The Colours, visit: http://www.facebook.com/thecoloursmusic

Example – Playing In The Shadows