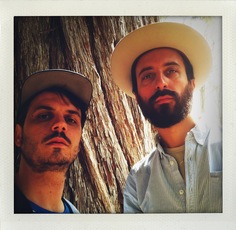 Herman Dune are delighted to announce the second single from their critically acclaimed new album Strange Moosic. The French duo of David-Ivar Herman Dune and Cosmic Néman follow the roaring success of the first single “Tell Me Something I don’t Know” (notable for its fantastic road movie video featuring Jon Hamm from Mad Men and a strange little blue yeti) with “Be A Doll and Take My Heart”, an upbeat pop ditty fuelled by acoustic guitars, David-Ivar’s distinctive vocals and fun-filled “oohs”.

David-Ivar wrote this as a love song, despite the fact that he started writing it after reading Deuteronomy 33:6, in which Moses blesses Reuben and says “May You Live And Not Die”. In context this might have been some kind of admonition but David-Ivar saw it otherwise and thought it was a wonderful thing to say to a loved one. Using the line as a starting point for the song, David added his favourite things to tell a woman you love, including the expression “Be A Doll”, which ended up being the title and the chorus of the song. As he explains: “Giving your heart to someone is a big deal and I felt that asking a girl nicely to “Be a doll and take my heart” balances out the wish that she would live and not die and the possessiveness of “May you never love another guy””

Recorded in Portland, Oregon at Type Foundry Studios (The Decemberists, Dirty Projectors, M Ward), the song’s structure was based on four chords being played sitting down, reminiscent of Kurt Cobain’s guitar-based songs like “Polly” or “On A Plane”, and was embellished with sweet backing vocals by local Portland artists Sean Flinn and Rachel Blumberg.

The band will be hitting the European festival scene with appearances at the likes of the Foxtrot Festival, as well as a full-blown tour in October.

“Innocent indie pop with a dash of wit is still the duo’s raison d’etre and they do it wonderfully well on Strange Moosic.” The Guardian

“…quirky, innocent, sweet indie songs, with a warm-hearted feel, tales of everyday life from the Jonathan Richman school of Rock, Strange Moosic has a more polished and brighter feel than usual. Good stuff.” The Sun

“Herman Dune’s 10th album is undoubtedly their best, and there’s no earthly reason… why singer/guitarist/songwriter David-Ivar Herman Dune and drummer Cosmic Neman shouldn’t be accepted as a different kind of pop star. The duo make a jangly, gauche, bittersweet-yet-optimistic sound… but with a muscular, sparse faux-American edge.” BBC