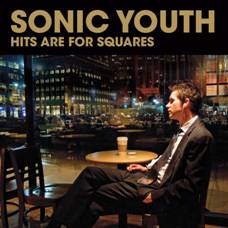 ‘1991: THE YEAR THAT PUNK BROKE’ – AVAILABLE FOR THE FIRST TIME ON DVD

Sonic Youth’s Hits Are For Squares, previously available only through limited outlets, will be released on October 31st 2011, through Universal Music Group.

Also included is the track “Slow Revolution” written and recorded for the original release. Hits Are For Squares includes a wide range of songs spanning the majority of Sonic Youth’s recorded works showing the diverse impact and influence they continue to have on the arts community.

2011 marks the 20th Anniversary of 1991: The Year Punk Broke, a pivotal film centered on the lives and experiences of avant-garde music pioneers Sonic Youth during their 1991 European festival tour. The film documents their headline tour as they introduced a new breed of bands who were on the verge of taking on the world and forever changing the course of music.

For the first time, 1991: The Year Punk Broke will finally make its debut on DVD on October 31st, 2011 (Universal Music Group). All footage has been fully restored with audio re-synced and remastered in uncompressed PCM stereo under the supervision of Sonic Youth. 1991: The Year Punk Broke, not only captures Sonic Youth’s raw and powerful live performances of songs such as “Dirty Boots,” “Teenage Riot,” “Kool Thing” and “Schizophrenia,” it offers a unique and rare behind-the-scenes look at daily life on the road.

Filmed a month prior to the release of their breakthrough album Nevermind, 1991: The Year Punk Broke also includes footage of Nirvana unknowingly on the cusp of leading a massive cultural movement as they performed anthems such as “Smells Like Teen Spirit,“ “Polly” and “Negative Creep.” Also featured is Dinosaur Jr.’s thundering live versions of “Freak Scene” and “The Wagon” and Babes In Toyland’s brutal performance of “Dustcake Boy” as well as an appearance from legendary punk forefathers The Ramones as they blast through their 1977 classic “Commando.” 1991: The Year Punk Broke is also packed with 65 minutes of bonus material, including the previously unreleased featurette “(This Is Known As) The Blues Scale” featuring over 40 minutes of additional live footage of Sonic Youth performing “White Kross,” “Eric’s Trip,” “Chapel Hill” and “Inhuman,” plus a rare Nirvana performance of “In Bloom.” Other extras include live rough cuts of “Mote” and “Flower,” the original movie trailer, and “Broken Punk” — a 2003 panel discussion Sonic Youth’s Thurston Moore, Steve Shelley and Lee Ranaldo, Dinosaur Jr.’s J. Mascis and Filmmaker Dave Markey.

Just as Woodstock captured the pinnacle of the ‘60s counter-culture movement in cinema, 1991: The Year Punk Broke prolifically documents a new generation of artists that once again grew tired of the stereotypical rock and roll lifestyle and ripped apart this force-fed formula, stripping it down completely and rebuilding from the ground up with its own DIY ethics and creating a scene all their own. With screeching feedback and a wall of sound, Sonic Youth lead the charge, straight through the superficial rock world of the ‘80s, marking the beginning of the year punk finally broke into the mainstream, giving credence and legitimacy to all those artists who helped pave the way before them.