Rebel Territory – Falling For You / On The Rock ‘n Roll 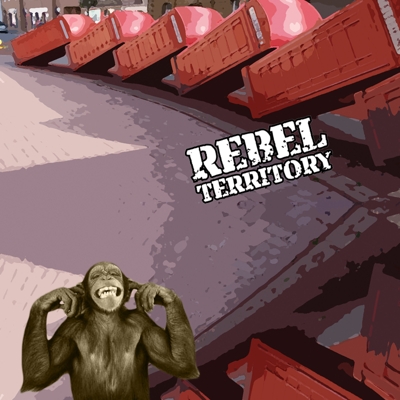 Strictly in terms of the resurgence of guitar rock as a viable genre, the first single by Belper, Derbyshire tykes Rebel Territory is quite a heartening thing. The trio have created something of a buzz for themselves, supporting the likes of The Mystery Jets, The Bluetones and, bafflingly enough, Tinchy Stryder. They’re proud to note on their website that Amy Winehouse herself thought they were “Great” and their music was featured on a Harley Davidson documentary in the states. So far, so usual for a up and coming British band but what sets this lot apart is their quintessential Britishness. Singer Lee Zajciw has a holler that recalls Gaz Coombes at his loudest and considerable guitar skills, like Noel Gallagher as a Guitar Hero avatar. While both tracks on this double A Side single are in thrall to an awful lot of British influences, like the aforementioned Oasis, early Manic Street Preachers and Kaiser Chiefs, in their offbeat but still catchy songwriting style.

Notice how I’ve managed to carefully step around actually mentioning whether it’s any good, because that’s when Rebel Territory’s master plan falls short, spectacularly. Pretty much everything about both tracks, from On The Rock ‘n’ Roll’s paean to, well, Rock ‘n’ Roll, going through to Falling For You’s hyperactive balladry is just dull. From the knuckle dragging lyrics to the rigidly unchanging melodies, everything has been done before, so much better. And I realize it’s easy to argue that when dealing with something as traditional as British Rock, but when bands like Mumford and Sons are crafting memorable songs out of something as seemingly out of date as folk then there really isn’t any excuse. Please, give this a listen if British Rock is your bag and there’s a shrine to Liam Gallagher in your attic, but don’t expect to fall in love with it, or feel anything much about it beyond a sinking sense of disillusionment.