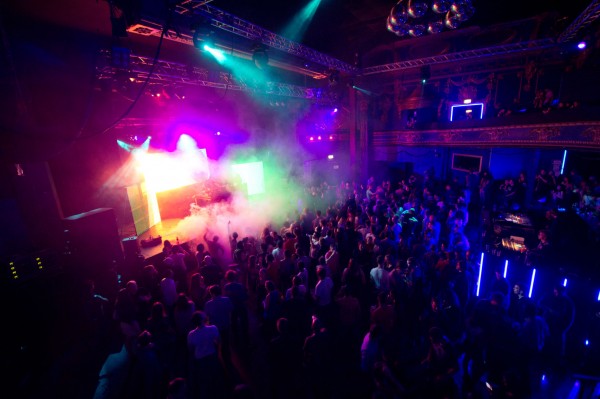 Ever since the Astoria was forcefully closed, London has been sorely missing a decent, mid-sized venue. Despite already hosting London’s best, big concert venue – Brixton Academy – Brix’ has now been blessed with (what is hopefully going to be) the ‘new Astoria.’

To be honest, this new club slash venue has more in common with Elephant & Castle’s The Coronet Theatre than the Astoria – both have capacities around the 2000 mark (Electric Brixton = 1500-1800, Coronet = 2200-2600), and both have retained their intial theatre/cinema style layout. In addition, the Astoria’s main purpose was for live music concerts, whereas Electric Brixton, like The Coronet, seems to be designed more for club nights (and this is supported by the upcoming events listed on the website).

Tonight’s event is the Spectrum organised club night, a night that’ll return once a month. After the most thorough search I’ve ever encountered in London (this is Brixton after all), I head in to take a look around. At £15 a ticket, and £4.50 a pint, Electric Brixton isn’t going to be the destination for those on a tight budget. If I had to speculate why the prices for entry and drinks is so high, I’d say it’s because Electric Brixton wants to remove any association from The Fridge – the club that was here beforehand, and a club that was renowned for being rough and seedy. What better way to alter the clientele than to jump up the prices.

The sound is loud (I wouldn’t expect anything other than loud from Spectrum – the bass from their last event I attended, featuring a warehouse and Chase & Status, literally blew me over), thanks to a fine sound system. First up is South Central in the main room, who get the half empty crowd semi-hyped with their shamelessly crowd-pleasing dubstep (the sample of Justice vs Simian gets the expected massive cheer). The techno and house-laced electro of The Japanese Popstars is a little flat, however, they manage to pass the time before the main events. Then comes on Jakwob, who plays a heavy, heavy, heavy dubstep set with real precision and flair – undoubtedly the set of the night. Stanton Warriorshave the skill and back catalogue to win over any crowd, and even though the billing for tonight is quite dubstep heavy, their oldschool breaks fits in A-OK. Cuts from their most recent album ‘The Warriors’ are warmly received, and just in case the dubstep heads aren’t interested in electro and breaks, they beef up the basslines of numerous Stanton tracks to ensure they stay bobbing.

All in all, Electric Brixton is a successful renovation. The sound is spot-on, the layout is simple and will work as both a club and venue, and the service and organisation is suitable (but could be improved). The one thing it’s missing, as of yet, is lineups – the listings so far are pretty thin, and severely lacking in actual concerts (as opposed to club nights). Perhaps it just needs a little time to settle into the London nightlife – here’s hoping it sticks around…

John Foxx And The Maths ‘The Shape Of Things’