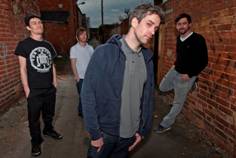 Capdown are universally recognised as one of the most popular bands of the British punk scene this century, with their influence stretching far beyond the UK.  Their debut album ‘Civil Disobedients’ released in 2000, is widely regarded as a pivotal album in the skapunk genre, ranked comfortably in the NME’s top 100 albums of the decade in 2010.  The success of this album led to an unparalleled touring schedule alongside the likes of Less Than Jake, Bad Religion, Snuff, Pennywise, The Mad Caddies and many many more.  This was followed by the release of their second album ‘Pound for the Sound’, along with their first on Household Name Records, and their third ‘Wind Up Toys’ on Fierce Panda.

The band’s blend of breakneck hardcore punk, dance, dub and ska set dancefloors on fire across Europe until the band’s split in 2007.  Despite the success of their early releases, Capdown will be remembered as one of the most exciting live bands the UK underground has produced, and for a limited time at least, they’re back.

An impromptu invitation led to Capdown headlining the Vans stage at the 2010 Slam Dunk Festivals, and they had a lot of fun so decided to play a few more, simple as that!  Their appearances at Reading and Leeds Festivals and a handful of clubs around the UK so far in 2011 have received glowing reviews, enthusing on the raw energy and power that cemented their cult status.  With the official line being ‘no timeframe, no agenda, NO PLAN’, their 11 date UK tour ending at London’s KOKO on 6th November may well be amongst the last shows they will ever play or they may inspire them to perform more.  This is a band you need to see once in your life, and chances are if you’ve seen them before you’re going to want to make sure you grab the chance to see them again!

Rita Hosking to tour UK in support of new album