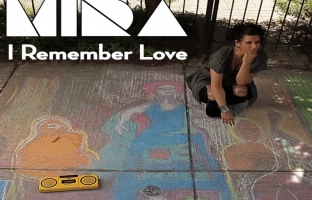 I Remember Love is the debut single by Mira Black, a woman with a quite diverse musical past (first dabbled with folk with touring band Acoustically Inclined, then moved on to jazz for the release of her own “Live at the Moment”) and as some first singles can be, is a problematic affair. The song’s sparse, thinner-than-air beats accompany a tale of love, loss, and longing. The cold electronic machinery here creates a toy-store-gone-berserk kind of atmosphere: the music tries to capture the sound of a broken carillon on a loop, and even Black has styled herself as a gothic robot doll.

The jazz influence is not immediately clear in this piece of delicate electronic, to the point that it might even be too delicate. The song wants momentum and climax, and while the lyrics hint at the desperation and loneliness of unfulfilled desire, you get the feeling that they don’t quite grasp it. The Coldplay School Of Vague Lyricism would be proud of this, but most of us perceive it as unauthentic. It’s a shame, really, because Mira Black’s voice strikes you immediately as one more than perfectly capable of delivering pure, unprocessed emotion, which is sure to come across beautifully if both music and lyrics will get pushed further enough to produce some more feeling, in the future.

Alex Clare – Up All Night