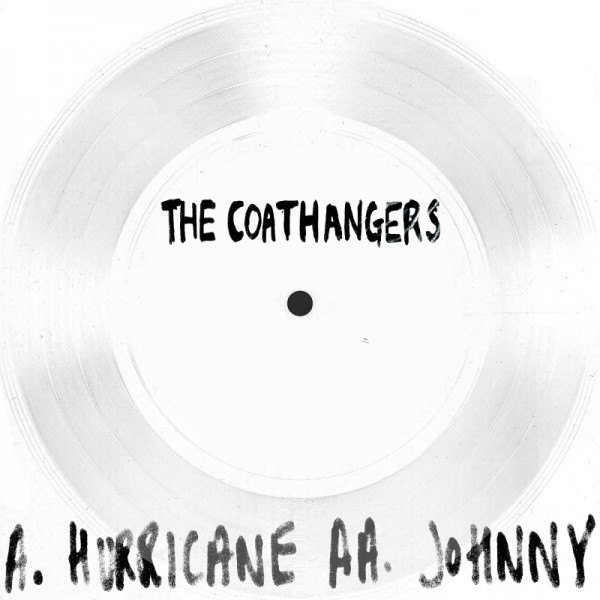 After surprising ourselves and everyone else with the very successful release of XRAY001 (Trogons’ flexidisc single ‘Contina’), X-Ray Recordings are excited to finally announce our second release (ok, we had a false start on this one, but we’re serious now ok?). Casting our eyes across the pond, XRAY002 is with Atlanta riot grrrls The Coathangers.

Their new album ‘Larceny & Old Lace’ was released back in June through the excellent Suicide Squeeze and floored us with its energy and attitude. Swinging frantically from ferocious to saccharine sweet, all the while showing an uncanny flair for writing thoroughly addictive hooks, The Coathangers do girl punk with more panache, style and humour than any of their peers. And it’s exactly that which has led us to commit two of our favourite tracks from the record to floppy plastic for your pleasure.

It comes backed with the no-wave snarls of ‘Johnny’ and will be released on October 24th 2011 on limited edition hand-numbered transparent flexidisc vinyl.

The Coathangers were a band before they were musicians. Their jokey attitude ran deep, right down to their name–a self-admittedly crude abortion reference for an all-girl group. The whole knowing-how-to-play-an-instrument thing was just a minor hurdle in their musical mission. And to their credit, The Coathangers stormed onto the scene, regardless of the handicap, as a completely unaffected, unpretentious, deliciously sloppy, and totally infectious rock band. What they lacked in formal training they made up for in an innate understanding of how to craft a hook and propel a song forward on sheer charisma.

Despite the casualness of The Coathangers approach to making music, that devil-may-care attitude and rowdy house-show vibe resonated with folks across the globe. They’ve released two albums and toured the states & more recently the UK with bands like The Thermals, Mika Miko, These Arms Are Snakes, and Young Widows.

Five years later, that reckless energy from their half-serious roots is every bit as vibrant and rambunctious on their latest album. But this time around we’re hearing a band that’s honed their trade and incorporated more stylistic variations; their first experience in a proper studio. The Coathangers’ latest offering is easily their best record to date and these two tracks the jewel in it’s crown.

X-Ray Recordings is a new London-based record label run by yours truly (Kate Price, not that one, the PR wanker) and Scott Walker (not that one, the Kasms guitarist one) with just one simple mission; to release music we love. The name X-Ray Recordings originates in the fact that x-rays were used as a readily available material for making flexidiscs to distribute underground punk and jazz records, which were prohibited in the Soviet Union after World War 2. We like the idea of secret punk rock hidden on x-rays. For more news on future releases visit www.xrayrecordings.com.