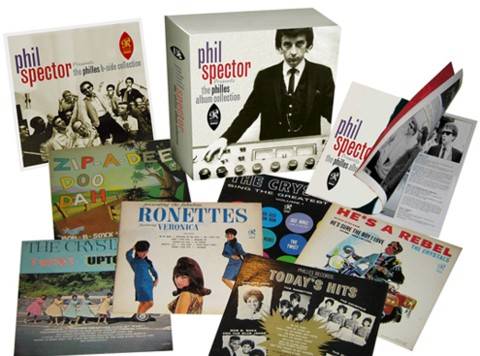 An unfortunate event hangs over the life of Phil Spector. Who knew when he started producing the songs on this seven album box set that one day he would go on to work with Starsailor? Listening to these songs now, can we see signs of this tragic end?

The CDs in this collection are presented in mini-replica LP sleeves. They are the first six original albums from the Philles record label (1962-1964), featuring the Crystals, the Ronettes, and Bob B. Soxx and the Blue Jeans. There’s also a CD of Spector’s never-before-collected instrumental B-sides.

The Crystals’ Twist Uptown album (1962) features Uptown and There’s No Other Like My Baby. It turns out they were the Sugababes of the 60s, with a revolving door policy when it came to singers. The producer was just as much in charge in the 60s as they are today, with Spector not waiting for the proper line-up to arrive before recording a version of He’s A Rebel under The Crystals’ name. It’s the eponymous lead track of The Crystal’s 1963 album. The sax and strings-inflected On Broadway is intoxicating. The melancholy No One Tells You is quietly beautiful. Without wishing to go mad with political correctness, it’s difficult to listen to He Hit Me (It Felt Like A Kiss) without wincing.

Bob B. Soxx and the Blue Jeans take the stage for 1963’s Zip-A-Dee-Doo-Dah album. Their version of this song is one of the less annoying renditions of this standard. My Heart Beat A Little Faster is unusual with its 4.5 minutes plus running time. While brevity is to be applauded in pop, this song benefits from having more room to breathe. The girl group makeover of White Cliffs of Dover takes the song in a more jaunty direction, but won’t replace the Vera Lynn version as the definitive. Bob B. Soxx and the Blue Jeans take on Woody Guthrie’s This Land Is Your Land with their distinctive brand of perkiness. Dr Kaplan’s Office is an instrumental. That’s disappointing, I wanted to know what was going on in there. Instead all we get is ghostly laughter.

Next is The Crystals Sing The Greatest Hits, Volume 1 (1963); though confusingly it includes four songs by the Ronettes. I can live without ever hearing Da Doo Ron Ron again, which I suspect was irritating the first time I heard it. Familiarity has bred further contempt. Listening to these albums consecutively leads to repetition, e.g. this disc features the third appearance of On Broadway, Uptown and the second appearance of He’s A Rebel. If you’re the sort of person who wants to listen to a seven CD box set then you probably want the songs in the right order as originally released. It’s not essential if you are a casual listener.

Philles Records Presents Today’s Hits (1963) features The Crystals, Bob B. Soxx and the Blue Jeans, the Ronettes, Darlene Love, and the Alley Cats. Five of the 12 songs here are repeated from previous discs. The attitude expressed in Not Too Young To Get Married and (Today I Met) The Boy I’m Going To Marry seems curious quaint.

Presenting The Fabulous Ronettes Featuring Veronica (1964) starts with Walking In The Rain, complete with storm sound effects. There’s more talk of marriage in So Young, not a cover of the Suede song of the same name, and Chapel of Love. One wonders how much relevance these songs can have to young people today.

The most intriguing collection is the last, the previously unreleased on CD Phil’s Flipsides by The Phil Spector Wall of Sound Orchestra, which sees the more experimental side of Spector. These came about as a way of ensuring that disc jockeys played the correct side of the record, by ensuring the b-side was of no commercial appeal. So while these songs may have no commercial appeal, do they have artistic appeal nearly 50 years on?

Flip & Nitty has all the artistic quality of Yakety Sax. It’s lift music for the lower regions of hell. To be fair, it isn’t a 60s girl group, which is a relief after six CDs of the stuff. Walkin’ Along La La La is throwaway, though the ‘oooh-wah-oooh’ vocals are engaging enough. You can understand why the material was consigned to b-sides. Only a Spector complete-ist would find much to enjoy here. There are jazz-infused pieces, such as Tedesco and Pitman, Nino and Sonny (Big Trouble), Miss Joan and Mister Sam, but nothing I would recommend seeking out.

If you’re a fan of Phil Spector’s you’ll enjoy seven CDs of his material. For the casual fan there’s almost too much music to digest, though at least the songs are provided in bite-sized chunks. More concise compilations are available. Spector found a formula which was popular and ran with it. If you like one of his songs, chances are you’ll like them all.

We Are The In Crowd – Best Intentions

Yellowcard – Hang You Up