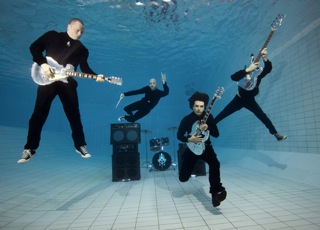 There is something heroic about Amplifier’s embrace – The Times

‘The Octopus’ is a beast of kraken-esque size and magnificence – Kerrang!

‘The Octopus’ is an album for others’ material to be compared to not only in 2011, but for many more years to come – BBC

‘An album that embraces the past but is unafraid of the future, as well as one that is entirely self-produced and mixed, serves as proof that, perhaps, the death of the record label is a good thing – 8/10 – Drowned In Sound

If you like your riffs loud, your solos frequent and your time signatures jumpy, ‘The Octopus’ is exactly what you’re after – 9/10 – Rocksound

After the release of their critically acclaimed double-album The Octopus earlier this year, Manchester band Amplifier have just announced details of a year ending headline UK tour. The dates are as follows:

Ticket to all dates are available from theocpotus.info.

The band has also just revealed a video for ‘Planet Of Insects‘, a track taken from The Octopus. A stunning piece of visual art, the video can be seen here, or by clicking the below still.

‘Planet Of Insects‘ can be downloaded for free from the bands bandcamp profile here.

The Stone Roses Headline T In The Park 2012