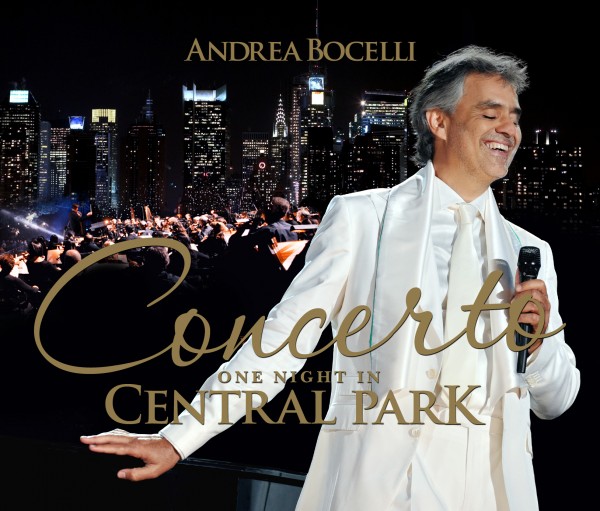 On September 15, 2011, internationally acclaimed tenor Andrea Bocelli gave a once in a lifetime, free concert as a gift to New York City on Central Park’s Great Lawn.  The spectacular event was captured for CD/DVD, making for the ultimate Bocelli collection, appealing to both loyal fans and new admirers alike.  The varied repertoire includes some of Bocelli’s finest performances to date from both the worlds of classical and pop he so successfully straddles unlike any other artist.   Andrea Bocelli Concerto: One Night in Central Park, will be released November 14th on Sugar/Universal, and for the first time ever captures the many sides of Bocelli’s musical passions all in one package. Additional performers include The New York Philharmonic, under the direction of musical director Alan Gilbert, with special guests Celine Dion, Tony Bennett, Bryn Terfel, Chris Botti, David Foster, Andrea Griminelli, Nicola Benedetti, Anna Maria Martinez and Pretty Yende.

Bocelli is widely regarded as the most popular Italian tenor in the world with more than seventy million albums sold.  Attended by over 60,000 people, Reuters called the Central Park concert “dazzling,” as well as “an important career milestone.” Bocelli lovingly described the opportunity to sing on the Great Lawn as “his father’s dream finally realized.”  As part of the evening, Bocelli recorded five new songs, all of which appear on the CD/DVD, including a stirring “Amazing Grace;” the iconic, “New York, New York,” with Tony Bennett; a swinging rendition of “More,” with Chris Botti and David Foster; “Volare,” also with Foster, and “Your Love (Once Upon A Time In The West)” from the famous film of the same name.