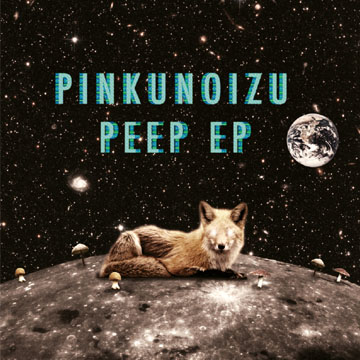 Following a triumphant performance at the latest Full Time Hobby night in London, the label’s latest signing, Pinkunoizu, released their debut EP PEEP. Named after the Japanese word for “pink noise”, the amorphous, Copenhagen-based band play an exotic mixture of lo-fi, high-life, shoegaze, Krautrock, nu-folklore, ’60s Asian pop and post-apocalyptic future rock. Their mission? “To never come full circle. To move hazily in bended ellipses. To bow the line and play it like a fiddle. To shoot it like an arrow. To climb the razorblade pyramid. To collect the cubic rubble from the ruins of tradition and put it together anew.”

The three-track PEEP EP offers a perfect introduction to the band’s expansive, psychedelic sound. Lead track Time Is Like A Melody is a swirling, circular mantra based on the title’s statement. “Time Is Like A Melody is one of the more condensed compositions we’ve made,” says lead vocalist Andreas Pallisgaard. “We see it like a piece of wax, capable of changing itself every time we play it.”

Recorded in Berlin, Everything Is Broken Or Stolen is an exotic, Aztec groove interrupted by speech and radio static. Starting out as a long jam, it was condensed to one tiny, hypnotic sample, looped and reworked into something new. “We were totally mesmerized by the sound,” says Pallisgaard. “I love the vocals Jaleh did on this track, with these strange saturated echoes: “Everything is broken or stolen / Carry my name like a token”.”

Closing the PEEP EP is the 11-minute epic Dairy Queen, named for the fast food chain but inspired by an idea of a milky white queen ruling a utopian realm. “The feeling of travelling through a vast landscape is mostly what Dairy Queen means to me,” says Pallisgaard. “It has an aspect of global connectedness, taking the listener from the highlands of Scotland via Chinese rice fields to the red dusty roads of Mali and ending in what sounds like a buzzing Indian marketplace. I like it when musical form moves ahead like that, without returning and repeating itself.”

Having played together in the acclaimed Danish experimental rock ensemble Le Fiasko, the members of Pinkunoizu – Jaleh Negari (drums), Jeppe Brix (guitars) Andreas Pallisgaard (guitars, vox), Jakob Falgren (guitars, keys, foot pedal bass) – put on a spectacular, intuitive, immersive and psychedelic live show. An album is set to follow next year. Until then, you can catch them at the following show;