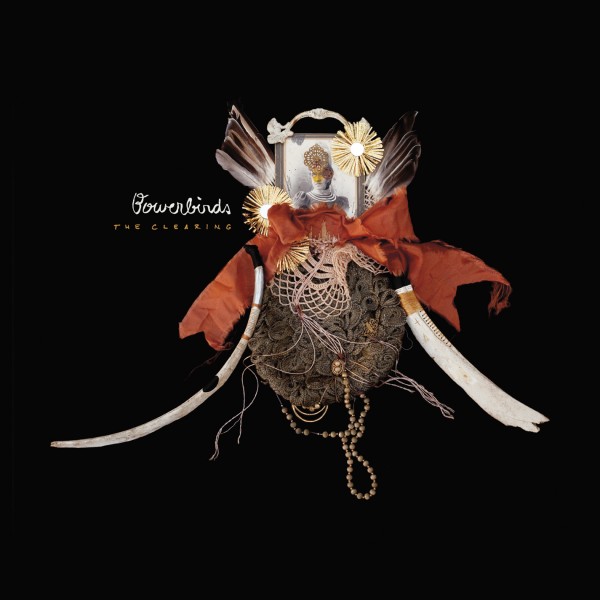 North Carolina’s Bowerbirds have announced details of their new album ‘The Clearing’, which was part-recorded at Bon Iver’s April Base studio in Wisconsin and will be released on Dead Oceans on the 6th March 2012.

The best songs of North Carolina’s Bowerbirds have always seemed eternal. Coruscated by Beth Tacular’s bird song and Phil Moore’s environmentalist empathy, “In Our Talons” (off Bowerbirds’ ‘Hymns for a Dark Horse’) was, at its core, a quest for solidarity in a world of closing shadows. Upper Air’s ‘Northern Lights’ painted a pained portrait of love shrouded in doubt as perfectly as Cash, Dylan or Cohen ever have. These felt like more than songs; they felt like treasures.

But those recordings were made on the quick and the cheap, with nylon-stringed guitars, fiddle lines and drum patterns that became comfortable. You could imagine these songs as old stateside standards, because, really, that’s how they sounded – campfire anthems sung by a couple clinging to very deep love.

‘The Clearing’ is the third album by the Bowerbirds, and as is often the case for bands that have found steady success, they had more time and better resources to make it. This is a bigger record, with bolder sounds, a broader scope, and more complicated songs. ‘Tuck The Darkness In’ for example, surges in its final two minutes with a wall of electric guitars and drums, while other tracks feature restless vibraphones, pianos and drums. Thing is, these songs don’t cede to the increased production demands. The guitars and strings, codas and bridges simply make these thoughts more urgent, more vital and more necessary, but not one bit less permanent.

‘The Clearing’ is more than a third record for the Bowerbirds. Between 2009’s ‘Upper Air’ and this one, Beth nearly died after a mysterious illness that put her in the hospital. They rescued and adopted a dog that ran beneath their tour van’s tires. Beth and Phil even ended their long relationship but began it again after realizing that, despite their own shortcomings, they didn’t want to be with anyone else. Mostly, though, they returned to their cabin in the woods of North Carolina to nest – to make soup and walk dogs, to make art and write songs, to realize that this was their life and find contentment in it. For the Bowerbirds, ‘The Clearing’ represents the perfect realization of a fresh, timely outlook. Here, there’s acceptance with ambition, patience with aspirations, understanding with intelligence. On ‘The Clearing’, Phil and Beth sing of the best and most important moments of their life and, in turn, create new ones.

To mark the announcement Bowerbirds have made the album’s opening track ‘Tuck The Darkness In’ available as a free download (and stream) from HERE.

The full tracklisting for ‘The Clearing’ is as follows: