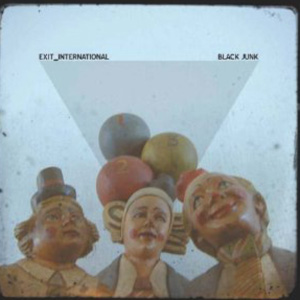 I am sure you all know what to expect by now: Exit_International’s music is as insane, loud and potentially damaging as attempting to hold Sonisphere on a neutron star. Their live shows have never failed to leave myself and most if not all other audience members totally gobsmacked, and the best thing about ‘Black Junk’ is that it genuinely achieves the near-impossible task of sounding like the band do.

Opening with ‘Glory Horn’, the album leaves you with little doubt and even less compromise. Stop-start dynamics take on a new level of menace before the song breaks into a marathon sprint of bass and percussion and shouting, and a chorus that is equal parts pop and evil sped-up fuzz rock bass. ‘Sex W/ Strangers’ too makes for a malignant cocktail of potentially sing-along (or at least shout-along) and the feeling that you should be building a bomb shelter to hide from the impending collapse of the world as we know it. Likewise, ‘My Mouth Is You Mouth’ is a track I would bet money on making some smaller children cry in its bewildering bloody-mindedness in every sense of the phrase. A song this mad and this loud shouldn’t be this interesting and this listenable, but it is.
In some ways, ‘Shake Your Bad Ass’ and ‘Body Joyrider’ contextualise the band: the former is heavy on the Bleach-era Nirvana, only taken to the levels Guitar Wolf drag The Ramones kicking and screaming to, and the latter just sounds like a nightmarish fevered cascade of punk, metal, pop and Girls Against Boys.
The best/worst moments (depending on your opinion) are when Exit_International go headfast into overdriven poppy lunacy. ‘Voices’ continually toes the line between catchy strangeness and something a hell of a lot darker as hooks descend with little warning into dual-bass avalanches of noise, and sparse clattering buildups. And of course, there is ‘Chainsaw Song’, for all you sickest of children out there: a gleeful and incredibly well-written disco number about using a chainsaw in bed. The production job here really lifts it from the scratchier EP version into a behemoth with so many layers of vocals it feels like there’s a whole crowd sitting on your head singing it in your ears, and the instruments are rendered humungous and evil, so by the final chorus you feel utterly engulfed by the song.
But what else really stands out, perhaps more so than in a live setting is that actually, Exit_International have some genuinely smart ideas in their songs. ‘Bowie’s Ghost’ for example has some fantastic drumming going on, and the ability to create an atmosphere within the first few seconds thanks to the unnerving backing vocals. Then there is ‘Sherman Fang’ possibly one of my favourite tracks on the album: equal parts exhilarating, terrifying and bewildering, from the creeping percussion intro to the skewed riffs and the way the vocal delivery is essentially The Joker’s grin as singing, if that could make any sense. The bridge pushes it into a whole new level of weird with a rhythm your brain can fall apart to and notes that shouldn’t belong together yet do. The end then takes a flying leap away from the realms of the comprehensible, and does it ever feel good!
The two most “atmospheric” songs for want of a better word are ‘Hey Disciple’ which ramps up from lo-fi distorted fury to breathless caranage (in more ways than one if you ever see it live) and the slow, genuinely chilling ‘King Of The Junkies’, a song that at nearly five minutes is like a dark odyssey to the outer limits. The barely-audible intro and fevered “chorus” create something that acts as a kind of anchor-point to the album, in its twisted little way.
What constantly astounds me is just how much these guys can do with two basses, drums and vocals. For all intents and purposes, this is an incredibly well-written album, played with skill, with an immense sound and what makes it great is that there’s no pretentious arsey-ness. Whether you attempt this depends on your ability to take some of the sickest and cleverest weirdness you’ll find this side of the dimensional border, but this was never going to be a cuddly record, was it? It’s the kind of party where you might wake up three months later in Tasmania as a naked amnesiac, but they let you in on whatever it was that led you to that adventure, and it somewhere in this haze, more fun than is reasonable was had.