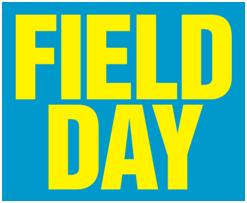 Tortoise / To Kill a King / The Vaccines / Zulu Winter

plus many more artists to be announced…

Field Day is delighted to confirm a further 6 acts to the 2012 bill. Joining the initial 27-strong initial line up is Mazzy Star with their beautiful yet haunting acoustic-flavoured ballads inspired by heavy blues and folk elements. Returning to the scene after a mammoth 15 year hiatus with new material early this year, this is a not-to-be-missed performance from this Californian duo.

London four-piece Theme Park will join fellow rising stars and nominees in BBC’s Sound of 2012 poll Spector, who have truly hit their stride with their anthemic sound and high octane live shows led by frontman Fred Macpherson. Meanwhile Grimes is sure to draw from genres as varied as New Age, K-pop, industrial and glitch, cementing her position as a truly flexible and evolving artist.

Also added are post-punk outfit THE MEN who are coming straight from the Brooklyn underground to Victoria Park next June. Pioneering Sacramento collective Death Grips will also be performing adding a hip hop element to the 2012 line up, while home-grown talent Zomby will no doubt prove that DJ sets can be as compelling as any live band by negotiating skilfully between genres in ever more innovative and progressive ways.

Entering into its sixth year, Field Day will be returning to Victoria Park with its unique formula of pioneering line up coupled with village fete mentality, all in the heart of east London. Due to the London 2012 Olympics, Field Day will now take place over the Diamond Jubilee June Bank Holiday weekend on Saturday 2nd June.

Hosted by forward-thinking promoters Eat Your Own Ears, Bugged Out!, Bleed and Lanzarote, Field Day is a festival that has become synonymous with imaginative and progressive bills and 2012 is certainly shaping up to be no exception to this rule.

Promoter Tom Baker of Eat Your Own Ears says: “I’m really excited about the line-up for Field Day 2012. It’s been something of a challenge after last year’s was so strong but with Franz Ferdinand closing the Eat Your Own Ears stage and with acts like Tortoise playing I’m hoping it will be just as good! As ever it’s hugely exciting to welcome acts from further afield; I’m particularly delighted to announce Afrocubism featuring Toumani and some incredible Cuban musicians – they’re going to blow people’s minds!”

Among the first acts to be confirmed are Glasgow’s thin white dukes, Franz Ferdinand. Arguably the most influential British band of the past decade, Franz Ferdinand are tipped for a major comeback next year, and this will be the first time the quartet  take to the Field Day stage. With a highly anticipated fourth album on Domino Records scheduled for release in 2012, expect big things from this headline performance.

Frontman Alex Kapranos says:  “I’m looking forward to Field Day this coming summer. I’ve been the last couple of years and the line-up’s always been excellent. Electrelane playing Small Town Boy and Martin Creed’s set were last year’s highlights for me. This year’s line-up is already shaping up well with Metronomy and R Stevie Moore on the bill. Being in walking distance of a good pub at the end of the night works well for me too…”

Playing their only 2012 UK festival performance at Field Day are the mesmerising Beirut. From humble origins in New Mexican singer-songwriter, Zach Condon’s bedroom in 2001, Beirut have gone on to travel the world both figuratively through albums such as ‘The Flying Club Cup’ and literally, having toured the world over. Expect plenty of musical wanderlust that evokes everything from Balkan funeral marches to Mariachi kissed soul, from this not-to-be-missed exclusive UK performance.

Metronomy’s Mercury Music Prize nominated third album, ‘The English Riviera’, has been one of the soundtracks to 2011. Characterised throughout with a sense of warmth and richness, it is in parts reminiscent of seminal 1970s West Coast studio albums from the likes of Fleetwood Mac and The Eagles, but due to Joseph Mount’s studio wizardry, the record sounds vibrant and entirely of its time. Expect a celebratory performance to perfectly soundtrack Field Day’s Village Mentality festivities.

World music has always played a significant part in Field Day’s line ups and 2012 certainly looks to continue that trend with performances from the legendary Afrocubism. Arguably one of the most long-awaited collaborations in recent music history, Afrocubism is the fruition of a plan hatched over fourteen years ago, to bring together musicians from Mali and Cuba. Nobody knows exactly why the Malians didn’t go to Havana when they were supposed to, but when they didn’t show up the Cubans decided to use the studio time anyway and the result was the eponymous Buena Vista Social Club album. Now thanks to British producer Nick Gold, the original plan has finally been realised, with Cuban singer/guitarist and original Buena Vista Social Club member, Eliades Ochoa leading this distinctive collaboration that also includes the Grammy Award winning Toumani Diabaté, the Jimi Hendrix of the Kora.

Bringing their unique brand of visceral post-rock to Field Day will be Tortoise. With band members typically multi-tasking across a number of different instruments, rhythmically complex and harmonically rich textures are guaranteed. Widescreen instrumentals will also be provided by Revere, who comprise violin, cello, keys and brass section in their line-up. By incorporating everything from gypsy songs, post-rock, film scores and gospel, they are able to produce dramatic music which moves from tiny, music?box openings to cacophonous walls of sound.

From being a red hot tip at the start of the year, The Vaccines can lay as good a claim as anyone to being the breakthrough band of the year. Having delivered on their early promise with a razor sharp debut LP and a series of increasingly huge live shows, their set is certain to combine retro guitar riffs with a storming upbeat tempo to get pulses racing.

From last year’s most highly anticipated band to the next, London five-piece Zulu Winter and Liverpudlian newcomers Outfit have been regularly topping ‘Ones to Watch’ lists for 2012. They sit happily with fellow newcomers To Kill A King alongside more established acts on the 2012 bill, including Buckinghamshire bred purveyor of ‘seaside melodies’ Baxter Dury and the ethereal Here We Go Magic, described by Pitchfork as creators of “hazy electronic textures, endlessly-spiralling lyrical loops, occasional forays into extended sections of ambience and noise.” Meanwhile Mogwai managed Scottish four-piece Errors are sure to assemble their archetypal electronic orchestra for a set that will no doubt oscillate from shoegazing sounds to more lo-fi techno endeavours, while husband and wife duo Peaking Lights will bring their individual dub-pop psychedelic sound to East London.

Delving into more dance driven pursuits, Field Day will be welcoming back SBTRKT’s mesmerising, bass-heavy party to the Bugged Out! stage. Representing the festival’s dance music contingent will

be fellow experimental, genre-crossing underground artists, Julio Bashmore and Warp label mates Hudson Mohawke and Rustie, all of whom have enjoyed stratospheric rises of late thanks to their ability to manipulate and fuse everything and anything from 2step, UK funky, dubstep, deep house, garage and US R’N’B. DJ/producer Maya Jane Coles will also be taking to the decks with her unique brand of deep tech-house.

Gold Panda’s debut, ‘Lucy Shiner’ seemed an overwhelming choice of most baffling omission from this year’s Mercury Music Prize nominations. A most human of dance albums, it has become a word of mouth classic and it’s follow-up will be one of the most eagerly awaited records of 2012. Elsewhere, Austrian electronica stalwart, Fennesz will undoubtedly be offering an altogether more ambient and wistful set, delivered with equally calculated agility and skill, while brothers Tom and Ben Page aka Rocketnumbernine will use drums, percussion and raw electronics to conjure intense musical landscapes. With New York born electronic producer Com Truise also confirmed, electronic nostalgia will be order of the day with his unique blend of manipulated 80s synth based electro.

Texan born musician Papa M aka David Pajo will be bringing stirring folk and country, while Chicago multi-instrumentalist Andrew Bird’s irreverent voice and stream of consciousness lyrics will form the basis for a captivating performance.  American anti-folk singer/songwriter and comic book creator Jeffery Lewis is a welcomed addition, whilst Nashville native and DIY pioneer, R. Stevie Moore will showcase his indie approach to music through a set of mainly self-released tracks in what is his first ever London festival, having played for the first time in 40 years in Autumn 2011. Moore is the oldest son of Bob Moore, veteran Nashville A-Team bassist, producer as well as a longtime sideman for Elvis Presley, Roy Orbison and many others.

As with years gone by, Field Day will be providing ample entertainment for those looking for respite from the music in the Village Mentality area on The Village Green. Expect traditional side stalls inspired by country pastimes and weird and wonderful fete games such as Blindfold Sweetcorn Husking Championship, Scone Throwing, Vegetable Discus and Human Wheelbarrow.

For more information go to: