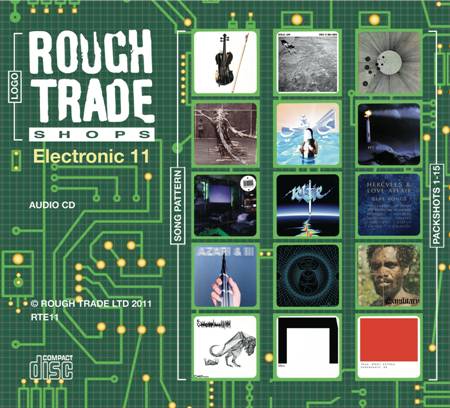 The new Rough Trade Shops compilation CD is aimed squarely at the New Year. Shiny, fresh, clean and minimal electronic music in your earphones provide the perfect soundtrack for the cold and frosty early January.

Rough Trade Shops Electronic 01 was released 10 years ago and we are revisiting the theme of our first genre compilation in order to share with you some of our favourite artists who have been utilising technology – as a means to an end – in the last year or so. The hardware / software tangibly present, you can almost hear the1’s and 0’s in the compositions here.

As Rob Young writes in the sleevenotes –“ Check, for instance, Emeralds’ Mark McGuire’s glowing “Alma”, which begins with a hymn; or Nicolas Jaar’s incantatory “Space is Only Noise if You Can See”, like a dubbed-out Depeche Mode. At the other end of the scale, Prurient and Keiji Haino (in tandem with Finnish sub-bass spelunkers Pansonic) use the full throated roar and the abject howl of the avant garde and the hardcore. Meanwhile, compare Rustie’s dense “Hyperthrust”, with its micro-events folded up and crammed into milliseconds, with alva noto’s “uni deform” bitcrush collision, which emerges from the rarefied world of conceptual sound art. Marcus Schmickler, who can occasionally be found making exploratory post-rock as Pluramon, sends your ears down a labyrinth of no return with the abstract operations of “Discordance Axis”, closely followed by Ekoplekz’s hallucinatory tone-scrub, jarring and alienating as an MK-ULTRA mind-control experiment.

In “And The World Laughs With You”, Brainfeeder’s shapeshifting boss Flying Lotus invites Thom Yorke to jack into a cybernautical call and response session. Even the most outwardly conventional track here, Hercules & Love Affair, has its House 4/4 scraped and sandblasted with gravelly patches of digital irritant. Ford & Lopatin’s “Emergency Room” is like some unearthly fusion of Scritti Politti and Heaven 17; John Maus’s swooning portamento synthi-fanfares summon up the Fairlight manoeuvres of The Thompson Twins and Blancmange. Azari & III’s “Manhooker” transports you back to sun-up at some orbital rave at the very close of that strange plastic decade.”

Comprising sound art, dubstep, chill-wave, witch house, electro-pop, digital hip hop, tech-minimalism, electro-house, and metal-machine music, supplied by labels such as editions Mego, Warp, Blastfirstpetite, raster-noton, Type, Skam, Tri Angle and more, RTE11 is selected by the staff at both London shops and is as stylistically-varied as would expect from us.

2.   Nicolas Jaar – Space is Only Noise If You Can See

3.   Flying Lotus – …And The World Laughs With You ft. Thom Yorke

18. Pansonic with Keiji Haino – If I could incarnate this feeling would you     consider it a creation