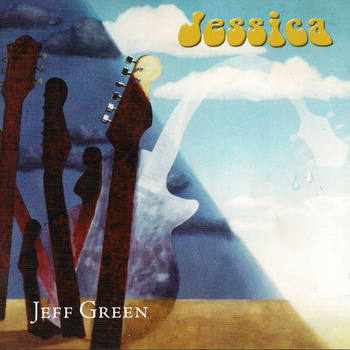 I always possess a certain trepidation regarding albums with strong sentiment and good intentions behind them, considering a fair amount of my childhood was dogged by that celebrity rework of Feed The World. But this is not a seasonal charity attention-grabber. This, despite a webpage that looks like it came from the 1990s smelling of mothballs and granny’s perfume, is in actual fact a stately prog rock outing. ‘Jessica’ by Jeff Green is a concept album for charity to help build a hospital area for bereaved parents of stillborn babies, but it earns it a place on the stereo for its own artistic merit too, which is more touching than glib lyrics could ever be.

‘For The Future’ opens with a dreamy yet surprisingly heavy Pink Floyd style epic, with expert guitars and a laid-back bluesy groove to the rhythm section, every instrument tight yet emotive. ‘Vision’ is a brief and disjointed acoustic minute, leading just about onto the atmospheric ‘On This Night’, a nine-minute voyage that sways gracefully from hushed and chilly to expansive. The vocals are not the strongest in the world, but the instruments are excellent, especially the guitars and drums, which hold the track together like sonic superglue. The bassist’s melodies don’t always gel, but the rhythm locks and allows the solos and synths to dominate nicely, with the latter half giving way to heady guitar soloing. The similarly lengthly ‘Willing The Clouds Away’ slows the mood, allowing the synth to shine over guitar for the beginning, and between the breathy tones employed and the soothing jazz bassline, it feels like the credit sequence for a new-age mystery film, before giving into more rock-flavoured territory in the latter half, but not losing the relaxed introspective feel it started with.

‘Pride’ starts us on the shorter songs, and unfortunately these are where the album dips. The heartfelt nature of the songs is clear, and parts are touching, however the melodies and lyrics hit the “cloying” mark a little too often.  ‘Pride’ and ‘Being’ are harder to swallow in this respect, although ‘Essence’ is a rather touching piano instrumental with enough depth to save it, and ‘Woman With Child’ takes us back to the more traditional prog, with heavy chorus effects and wailing blues guitar and mournful piano that expresses far more than the words can.

Of course, ‘Jessie’s Theme’ is the song around which the album orbits, and it is another strangely graceful song. Slow and with a clear narrative arc in terms of melodic expression, the instruments are on fine form, shifting imperceptibly from dreamlike to hopeful to dark in such a manner that you don’t notice until the atmosphere has enveloped you, with diverse instrumentation used to full effect. The unfortunate effect is that it makes the space-age ‘Tomorrow Never Came’ feel weaker than it really is, which feels almost like it was thrown in to justify its predecessor to people who find instrumentals less appealing. But ‘Prittlewell Chase’ is another cinematic narrative instrumental, with an exquisite harp/guitar interplay that drops out to a surprise techno synth/drum loop that threatens to turn listeners off, but if it is persevered with, the guitar fits it into a better context before acoustic strumming falls in layers over this intrusion, allowing it to fit with the piece. ‘Live Forever’ closes with an almost pop style song, with simple lyrics and catchy melodic patterns.

Although not without its weak points, ‘Jessica’ is a commendable release, with its instrumental tracks being the clear winners in terms of the material on offer, and their prevalence means that this album goes beyond its context and listening to the songs is more than just an act of goodwill.