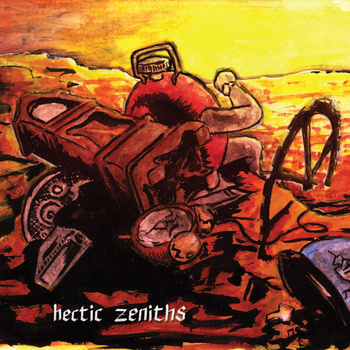 This is the first self titled work of New York artist Adam Morgan Prince. Hectic Zeniths’ derives from an anagram of Zeitschtichen, meaning ‘Layers of time’ in German. Each track offers layers, richly build up against one another producing a brooding sound scape.

Most of the tracks from the album are centralised around a melancholy piano section and a small section of drums beneath. Thrown in on top of these two come vocal samples that sound more like an instrument than they do vocals, strings and on the rare occasion the riff or open chords of a guitar (Two of these being ‘Why Shoot Debris About It’ and ‘Zeitschtichen’) giving the album a dark and sombre record that’s almost perfect for bopping along on a cold day with your headphones in.

Opening track, ‘One That Got Away’ sets the mood well, including a light beat on the drums, a sample of strings and haunting vocals before surging through into piano led track ‘Then and Now’.

The subtle guitar that plays amongst the piano and steady drums of ‘Zeitschtichen’ compliments the track well. It goes alongside another stand out track of the album ‘I Might Drown’ full of strong cuts, as well as the most upbeat and energetic drums on the entire album. A strange decision as this beat contrasts incredibly against the subtle keys and eerie vocals that float hauntingly between the layers of the track and the dramatic burst of violin strings make ‘I Might Drown’ the best song on the album.

While never reaching their dramatic and theatrical heights, Hectic Zeniths draws out rich and densely layered music throughout. Some may feel that the self titled album may be a little on the short side, with only 11 tracks however, it’s a one of those albums that can’t be liked…it’s loved or hated and it’s up to you to decide.

The album is self released on the 10th of January; you can preorder it now from the band’s band camp page at – http://hecticzeniths.bandcamp.com/