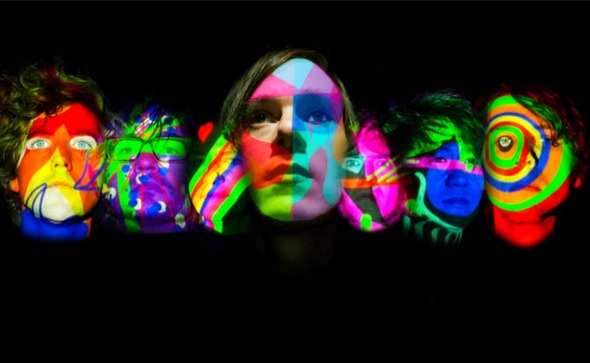 Early praise for Paralytic Stalks:
“Featuring a flurry of flutes, the joyful dance-pop song feels like some brilliant marriage between early Elton John and Barry Gibb.” [“Dour Percentage”] Under The Radar

“A glammy slice of power pop that features group shouts in the chorus, sweet vocals, and a swirling flute solo in the middle. More like this, please.” [“Dour Percentage”] – Prefix

It’s an impressive one, jumping from unplugged confessional to atonal weirdness and then back to sunny ’60s-style psych-pop, all while still taking aim at fake idols.” [“Wintered Debts”] – SPIN.com

of Montreal have released new single ‘Dour Percentage’, the flute-driven, ELO-inspired lead track from their forthcoming new album‘Paralytic Stalks’. The band have also announced a run of UK and European tour dates to add to their extensive 2012 tour schedule. Full details are below which begin 16th April in Helsinki, taking in a big show at London’s Koko on the 25th April.

In addition it was confirmed last night that of Montreal will perform ‘Dour Percentage’ for their return to Late Night with Jimmy Fallon on 8th February.

of Montreal’s ‘Paralytic Stalks’ will be available in the UK 6th February, 7th February worldwide via Polyvinyl Records on CD, 2xLP and all DSPs. The album will also be available as a hand-numbered, limited edition cassette (of 500) via Indiana label Joyful Noise Recordings. ‘Paralytic Stalks’ will also see release via partnerships with Arts & Crafts Mexico, Contrarede Records in Japan and with Baram Records in Korea. ‘Paralytic Stalks’ was written, performed, engineered, and produced by Kevin Barnes at his own Sunlandic Studios in Athens, GA; and mixed at Chase Park Transduction with the assistance of engineer Drew Vandenberg (Deerhunter, Toro y Moi).

How do you approach an album as tantalizingly complex as ‘Paralytic Stalks’? You could begin from a lyrical perspective and appraise the occasion it provides for an unobstructed view directly into the psyche of Kevin Barnes, of Montreal’s principal songwriter. But be prepared — this is not Barnes filtered through the lens of an adopted persona or invented alter ego. Rather, these are confessions of an infinitely more personal nature than anything he’s written since 2007’s ’Hissing Fauna, Are You the Destroyer?’

‘Paralytic Stalks’ is a stimulating array of densely packed ideas presented with stunning agility. Never before has an of Montreal record moved so fluidly from one song to the next — each track feeding off the last in what seems a singular album-long movement that never allows you to rip your ears away.

After the addition of classically trained violinist Kishi Bashi to of Montreal’s touring line-up, Barnes embraced the idea of working with session musicians (many of whom were Kishi Bashi’s friends) for the first time in his career. During this period, Barnes forged a special connection with Zachary Cowell, a session musician who subsequently arranged all of the album’s brass and woodwind parts (and is now the band’s newest member). The experience also emboldened Barnes to venture into previously unexplored territory with his songwriting.

As a result, ‘Paralytic Stalks’ at times resembles modern classical with its intricate compositions, while at others echoes of neo-prog, pseudo-country, and 60s pop can be heard. Examples of these new elements abound throughout the record, notably on ‘Wintered Debts’, which witnesses its hushed vocal and acoustic guitar intro giving way to a country shuffle replete with pedal steel guitar, as well as the gentler strains of single ‘Dour Percentage’.

The previously announced US tour kicks-off 7th March in Jacksonville and wraps up on 7th April in Atlanta, GA. The US tour will feature direct support (select cities) from label mates Deerhoof and Loney Dear — with of Montreal band member Kishi Bashi handling first of three duties for a majority of the tour. On March 15 of Montreal will headline Polyvinyl Records SXSW showcase at Emo’s East in Austin, TX. There will be more SXSW performances announced shortly. Check the band’s website for full details of their US shows.