Cut Yourself in Half: Say Goodbye to The World / Psycho Human Being Disaster 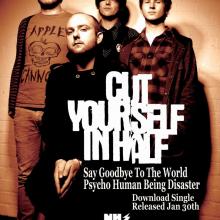 Hailing from Bradford, Cut Yourself in Half manage to pull off a slightly worrying trick of sounding very much a part of the Leeds rock scene, while feeling fresh enough to transcend it. This should be a good thing but there’s probably going to be more than a few people writing them off as Pulled Apart by Horses sound-alikes and ignoring them. This is a crying shame, Cut Yourself in Half are an (Slightly) more measured, subtle proposition, the Hannibal Lector to PABH’s Joker. They also, it feels slightly redundant to say, rock like an absolute bastard.

Opening track Say Goodbye to the World swoops in on a Queens of the Stone Age-esque riff and immediately grabs ones attention by sounding like the unholy offspring of Black Sabbath and fellow Yorkshire tykes Dinosaur Pile-Up, before going all Muse during the solo, with an unidentifiable squeal seemingly lifted from a sixties Doctor Who episode weaving in and out of it. Psycho Human Being Disaster is darker, bringing to mind the aforementioned QOTSA doing unspeakable things to Iron Maiden but it’s less varied than the opener. Although it does feature vocalist George Quinn shrieking like a man possessed, and that’s always good, especially after he proves he’s got a pretty impressive set of pipes to him on both tracks. In all, an enticing debut from some fascinating new talents.