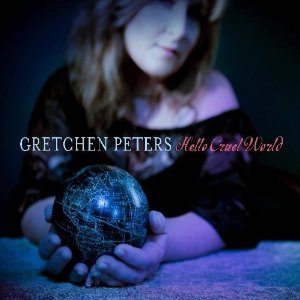 Hello Cruel World is Gretchen Peter’s new release, continuing her prolific career as country songstress. The atmosphere of the opening, title track ranges from the matador-esque guitars and the dramatic piano and violin that abound to counter-effect Gretchen’s raw, smoke-soaked voice…

Diving further into the tracks it becomes clearer that sexuality is a big topic here… and while Paradise Found is a basically a 5-minute long sexual metaphor with strings – “Baby you’ve got the key to my garden doors” , “open the doors and come inside” are all a touch too much in this context– this is the only over-the-top episode . Gretchen is at her best when she deals with the hopes and fears embedded in womanhood, and such moments abound in Hello Cruel World: the honesty and humour in Woman on the Wheel are a clear example, with her voice assuming an almost Dylan-esque matter-of-fact attitude. Earlier on in the record Matador, a bitter southern-American tale of addiction and its love-destroying ways, provided a true high point. Its haunting harmonica helps the dry story-telling deliver its poignancy. On Camille, the tale turns to single-dom; “The ghost in your head and the man in your bed they look like they’re one and the same” is a brilliant image of fallen lust.

Although there are times when her wisdom trespasses into the self-indulgent – Five Minutes, for instance, is a reflections-by-the-fireplace moment splashed with funereal strings, or St Peter, with its slanted, emphatic vocals which also verge on the dramatic – this album works  in many ways. Its musical savoir-faire – the way the string section is never boastful, the level of intense narrative maintained throughout – lets a certain shade of country wisdom shine through.