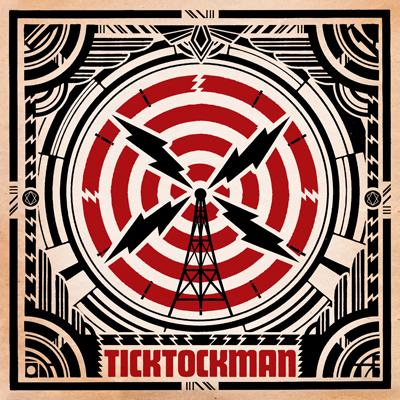 Experimental alt-rockers Ticktockman are set to release their debut self-titled album on February 14, 2012. Working with producer Derek Moree in their hometown of Seattle, WA, the eleven new tracks featured on Ticktockman are a combination of technical guitar work, groove-based ambience, and brooding, catchy vocals; birthing a record that will make you forget what you know about the state of modern rock music. “Conceptually, this record centers around the feeling of not having a voice as an individual. Our record is sort of in line with the ‘loudest voice wins’ approach to life. Other themes include paranoia, corporate takeover, depression, and the idea of The Singularity.”

Finding their voice in rapid, technical drumming and heavy blues guitar riffs, Ticktockman rounded out its lineup to start playing shows in 2010 by adding Morgan Bruner (Guitar), Brock Lowry (Drums), and Phil Sells (Bass). The energy from these five multi-disciplined musicians led to the production of their brand new self-titled album, Ticktockman.

“The Ticktockman” is a figure from a Harlan Ellison short story titled, “‘Repent Harlequin!’ Said the Ticktockman.” The character represents a dictator who wants to regiment society and make everyone the same. The group was drawn to the story’s title because it relates to their musical identity, as Ticktockman was formed under the idea that louder, more challenging rock music can be made in a catchy and accessible way. The band explains, “the aggressiveness of our sound is inspired by the frustration of what’s popular in our region today. We want to bring loud music back to Seattle and make the younger generation feel alive through that sound.”