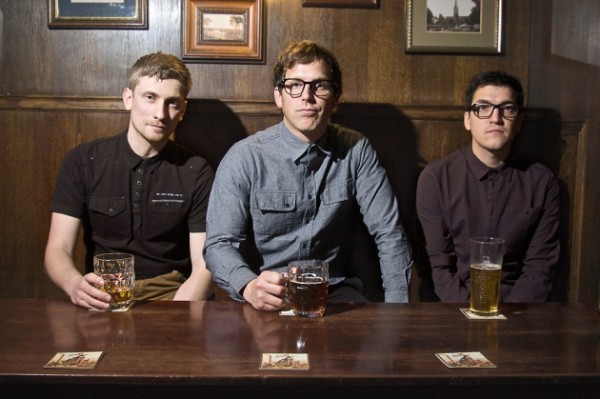 Hailing from Witney in Oxfordshire, Black Hats are Ian Budd (Bass & Vocals), Nick Breakspear (Guitar & Vocals) and Mark Franklin (Drums & Vocals). Having spent the last 18 months earning a reputation on the vibrant and competitive Oxford music scene, the band are now ready to reach out to national audiences with a debut single and a national tour.

Produced by Sam Williams (Plan B, Supergrass) Kick in the Doors sets a hectic pace and makes a statement that is all post punk/power pop attitude and clarion call hooks and rhythms. Its release on Monday April 16 2012 coincides with the release on Monday April 30 2012 of the bands mini album Austerity for the Hoi Polloi. (Distri bution – Believe Digital UK)

Supporting the release of Kick in the Doors will be the Black Hats ‘Secret Gig’ Tour. The reputation around their visceral and energetic live show has resulted in packed audiences at festivals such as Wychwood Festival 2011 and Cornbury Festival, plus support slots with Electric Six and The Hoosiers, have seen the band reach out to an ever widening audience.

To add to the angular approach of the Secret Gig campaign Mark, Ian and Nick will engage fans with a series of ‘puzzles’ on social media to take advantage of the bands already active fan base.