Kiros – Lay Your Weapons Down 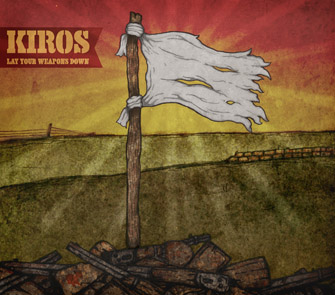 Listening to Kiros’ ‘Lay Your Weapons Down’, I’m teleported back to the surreal land of musical discovery I went though a few years back, dabbling in that nebulous region of “emo” and discovering that rather American brand of introspective rawk that blends pop-punk, heavy guitars, and heart-on-sleeve, mostly faith-based lyrics. And that’s an awkward situation for an atheist rocker. I’d have to say on the one and Kiros never preach, and they have glimmers of potential. However, despite the best intentions their individual sonic stamp is in sore need of a boost and spit-shine.

‘Broken State’ kicks things off with a snare roll and slick riff before veering quickly into Panic! At The Disco via metal territory: simple pop hooks fed through a Marshall stack. It gets a bit repetitive thanks to the bog-standard chorus, and similarly ‘One Thing’ feels honest, if no less soppy. Get past the chorus, and the slow-dance riff and verse lyrics are rather solid, but that chorus just dogs the song.

But then Kiros find a groove. Initially ‘Outlaws And Prodigials’ feels like another slow, misguided one, but that squalling stadium rock opening and immense dynamics really hit upon something: the verses are slow and sparse with treble-drenched guitar and chugging rhythms to compliment the typically nasally vocal style, but then it all builds into that big old string-drenched climactic chorus and it actually works. The thing is, Kiros have enough self-consciousness to smell a radio ballad when it creeps onto their instruments, but enough abandon to throw it all in there. Every last cheesy note and every last ounce of listening to Muse and American pop/rock stations to pull off a weirdly gospel/cinematic slice of appealingly cathartic and sentimental sing-along. Closer ‘Something Beautiful’ tones down the immensity but keeps that better realm between trite and universal. Annoyingly, the balladry falls elsewhere. ‘Passive Through’ is earnest in intention, but its bland cod-country acoustic strumming and generic woahs just loses listener attention despite the poetic lyrical bent.

‘Unshaken’ is again a bit formulaic, but the fist-pumping chant-along and the stripped-back guitar focus brings to mind a more approachable Dead Poetic, with tense atmosphere and a falling-away of the persistent dragging of choruses as the band seem to find a slightly more interesting approach musically. And lo and behold, ‘Good Intentions, Bad Directions’ is a genuinely solid and thoughtful US pop number. You can bop around to the chorus, you can sing along to harmonised vocals, and have a slight existential ponder in between once you calm down during the hushed bridge. Same with the irritatingly “woah” filled ‘Found Me’. If it weren’t for those woahs, you’d have a sort of poor man’s gateway drug for Twilight fans to creep into the much more healthy territory of listening to early Brand New.

The unfortunate thing with this album is no matter how heartfelt it gets, no matter how many good ballads and even rock moments intersperse it, the pop side isn’t very tempered, and it overruns the band’s better sensibilities. I’m not saying all good bands must hit your with three overdrive pedals before they’re good, just that Kiros get so caught up in how a radio song should sound, their better, even touching, moments get swamped by a bit too much melodrama and sound like the pre-watershed slot on whatever the States’ equivalent of Kerrang! is.