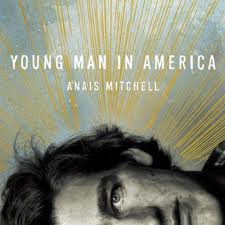 Anais Mitchell, a Vermont singer songwriter and daughter to an inspiring novelist, was encouraged to have an interest in music by her early worldwide travels. In style she’s compared to Gillian Welch, Bob Dylan and Leonard Cohen.

Hadestown, her previous album, was stunning and ambitious. As an epic folk, jazz and blues opera it was difficult to follow. It had huge critical acclaim as an awe inspiring work which was both powerful and breathtaking.

Young Man in America, her fourth album release, was produced by Todd Sickafoose at Earycanal in New York and California. It’s released on February 28, 2012 by Wilderland Records / Thirty Tigers.

This is an exquisitely beautiful album in both texture and arrangement. It’s simplistic, earthy and wildly inventive. Innocent, liberated hippy charm combines with a startling urban maturity that restlessly sparkles and dazzles.

The listener is gradually captivated by music which is remarkably free, fearless and incredibly emotional. Anais Mitchell’s daring stories follow difficult and tragic American themes: crumbling landscapes, lost people and social neglect. Her characters are lovers, tailors, shepherds and poets. Despite the traditional language they become credible and believable as we hear their intimate tales of sadness, grief, love and lust.

Wilderland with its menacing drum beats, crackles of distortion and vocal harmonies has an impressive stream-of-consciousness feel. The hero in Young Man in America is “a restless character on a feverish hunt for pleasure and success. Alcohol, fame, money, sex—nothing satisfies him,” says Anais Mitchell. “He’s desirous and very sad.” He was inspired by the every-man-for-himself attitude in America that she witnessed during the recent recession. Ships is an intimate crescendo of regal horns and drums.

Anais Mitchell is haunting and marvellously energetic. She fiercely bubbles with ideas. Once you’ve finished this album, you’ll want to listen to it all over again.