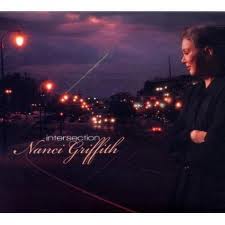 Nanci Griffith is a Grammy Award winning singer, guitarist and songwriter from Austin, Texas whose work spans a variety of musical genres, predominantly folk and country.

Intersection, her twentieth album in a 34 year career, is released on the 20th February, 2012 on Proper Records. Nanci Griffith once sang: “No one ever knows the heart of anyone else.” But, as an articulate and observant storyteller with a deep understanding about people and the way their lives change, she gets pretty close. You’re quickly captivated and taken to places at the heart of the songs. She’s remarkably honest and eloquent and she writes beautifully.

Bethlehem Steel is a lament about the closing of a steel mill in the historic Pennsylvania town where Robert De Niro filmed The Deer Hunter.  It’s about the end of an era in American history and is meaningful at a time of change and financial instability.

Bad Seed tells of the hostility between her father and herself and she admits that their similarities may have been the cause of the problem.

In Hell No (I’m Not Alright) she sings “I’m not okay, and neither are you and neither are we,” In this emotional and angry song the vocals are almost shouted rather than sung.

Some of the songs, written by others, reflect her personal experiences. Mark Seliger’s Never Going Back reveals some uneasy memories about a defiant young woman leaving her native Texas.

Intersection may be her best album for several years. It’s uplifting and deeply personal without the quiet contemplation of previous albums.