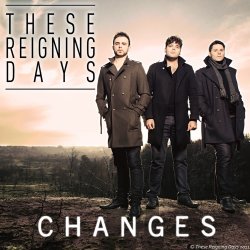 Fellow Devonians These Reigning Days’ new single ‘Changes’ is a very impressive chunk of deep, deep indie-rock. This Torbay trio are led by the former frontman of The Quails – Dan Steer – who only split last year, which makes These Reigning Days a very young band. Despite this, their delivery comes across as overwhelming mature, like a band that has been perfecting their details for many moons.

‘Changes’ is the band’s debut single, and it has been expertly produced by Yoad Nevo (Pet Shop Boys, Goldfrapp, Duran Duran). Musically, it is dark, moody indie in the vein of post-punk (the brooding sort of post-punk, like Interpol, White Lies or Editors). The layers of guitar lines are strong but understated, and there is a twisted, indie-pop synth sound quietly driving the whole composition. ‘Changes’ features real sonic depth, with atmospheric keys lurking in the background of both the minimal verse and heavier, guitar-led chorus. Captivating stuff.

Like the post-punk bands I already referenced, These Reigning Days are charcterised by their frontman’s lead vocal. Dan Steer’s voice is, to put it simply, immaculate. He can pull out one hell of a baritone, as with the slow-burning chorus, but he also has an impressive range (something other baritone post-punk singer’s lack), and the verse shows what glorious singing Steer is capable of.

I really don’t want to be one of those reviewers who gushingly overhypes a new, underground band, and heaps masses of undue praise on band’s debut single, but These Reigning Days’ ‘Changes’ is truly special. I have not awarded it any more hype or praise than it deserves – it is hands down the best debut single I have heard in 2012.

Gecko Chamber – The Other Side Of Sanity