JODIE MARIE – I Got You 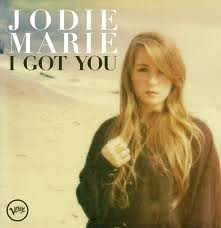 Jodie Marie, a 20-year-old from Narberth in Pembrokeshire, was quickly signed to major record label Decca after her discovery in West Wales. She was the first artist signed by Simon Gavin since Duffy, though her refreshing and promising style is very different.

She grew up listening to blues and her influences are Bonnie Raitt, Jeff Buckley, B.B. King and Janis Joplin. She’s compared to American singer-songwriter Carole King and has country and folk tinges to her music.

Jodie Marie’s debut album Mountain Echo is released on 5th March, 2012. It revives the classic the Verve label and is produced by Suede guitarist Bernard Butler.

I Got You, her excellent new single taken from the album, is released on 27th February, 2012. It demonstrates her fine voice and warm original style. This is a deeply personal song with an impressive and joyous Motown soul beat. It shows huge talent and a unique earthy tone.