A Chat With Twelve Feet Clay 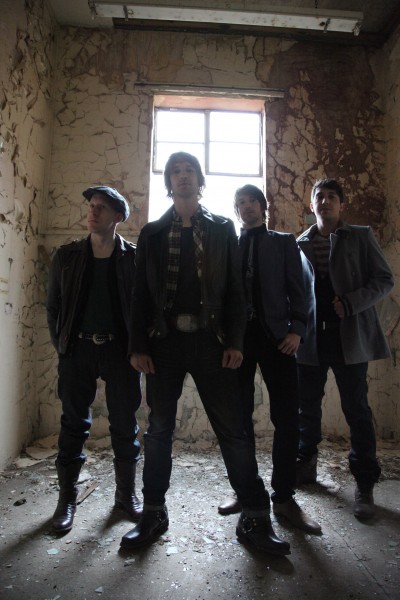 First of all Twelve Clay Feet, thank you for talking to us and congratulations on your debut album “Totem Bells”.

AAAmusic: Can you tell us a little bit about the process of making this record?

We started almost entirely independently, with our bass player Ollie, teaching himself how to record and produce. I guess Jay (Lead Guitar) Bob (Drums) and myself just made tea and positive noises, when we weren’t recording. We met Fraser Smith (Shed Seven/Ian Brown), who agreed to mix the album, he did a couple of taster mixes and we were blown away. He seemed to understand what we are about from the start. We were also blessed with Kate Smith who has worked tirelessly with us, as artwork designer, right through to promotional agent. They’re both songwriters and musicians, so it’s been a really enjoyable process.

AAAmusic: Are there any other artists that inspire your music and if so, are there any notable influences on your new album?

We have our heroes, and have all been inspired by loads of different stuff. We all share a love of Pink Floyd, Jane’s Addiction and Radiohead, to name a few. In reality though, I think Totem Bells is a combination of all our individual influences coming together under the collective personality of the band. It’s more a reflection of what we’ve learned to create together as opposed to trying to re interpret the music we listen too.

AAAmusic: Some of your songs sound quite angst ridden, are the stories behind the lyrics all real life experiences?

In one way or another, yes, but I guess any angst comes from restlessness, rather than pain or anguish. I often take events and things I’ve witnessed and use them to put flesh onto an idea rather than describing something literal. Sometimes the stories behind the lyrics are mashed up versions of real life, closer to how we experience dreams, but that’s not to say they haven’t been felt or aren’t taken from my own life. Some songs are written more subconsciously, drawing on pictures and experiences from the back of my head and only afterward, realising where I was coming from. I like how great Blues singers perform, you can feel what they’re saying, to the point where knowing the words isn’t necessary to understand or connect with it.

AAAmusic: You guys have been playing together as a band for quite some time, do you think your style of music changed over the years?

The song that persuaded Ollie to join Jay, Bob and myself was a 10 minute odyssey, with a repetitive melody that seemed to be based around ‘Three Blind Mice.” So in one sense it has.  Whilst improving we moved away from our influences and toward our own style, as the identity of the band changed and developed. It’s still the same characters, but the script is better and the scenery’s changed.

AAAMusic: What can people expect from your live shows?

“Sweat and steaming guitars,” someone described it as, I liked that. We create a big sound but it’s not always heavy. We move through different moods and styles, which makes for an energetic, but dynamic set.

AAAmusic: Who would you most like to collaborate with?

I asked Bob, this question and he said, “dead… John Lennon…alive…Paul McCartney, no, Ringo, it should be Ringo!” So look out for something with lots of drums. Recently, Bob did play a song with Chris Helme, (former front man of The Seahorses) at our album launch, if that counts as a collaboration?

AAAmusic: What have you guys got going on over the next couple of months?

We heading off around the country, to bring the album to as many people as possible, including supporting seventies Prog band ‘Curved Air’ at the Borderline in April. We’ll find time for writing though, we never really stop either jamming or working on new material.