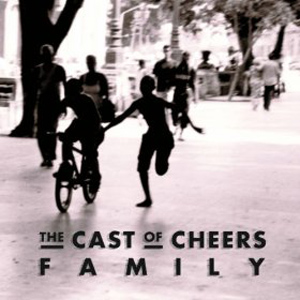 It may be hard to take seriously a band that got 8/10 from the Daily Star, but don’t let that put you off. Family is the debut single from the Cast of Cheers, the band of four hailing from Dublin and it’s just how a debut single should be: insanely catchy. Upon switching on the song you may think to yourself, ‘please don’t let it be just another Indie band…’ but fear not fellow music traveller, sure the Cast of Cheers may be clad in skinny jeans and plaid but they really do have something interesting to offer, even if getting them off of your play list may prove a problem…Family is a short but sweet 2.33 minutes of pure Indie-pop which is sure to stick to your neurones. Repetitive is not always a bad thing and certainly isn’t here, the pummel of base and drums contrasting with the shooting guitar make for something borderline hypnotic. The Cast of Cheers have certainly found the essence of catchiness, which leads to much anticipation for their new album, out later this year.

‘My head, my heart, my heart, the floor… My eyes keep moving ever closer to the door… The walls keep coming and they’re scratching at the door.’

The use of repetition works nicely in the lyrics as well, mostly monosyllabic lyrics with a few two syllable words makes the whole song, especially the chorus very captivating and creates an infectious rhythm. Family is supported by the song, Loose Talk at a Party, which is equally hypnotic and further confirms Cast of Cheers the kings of catchiness.

However, despite this being the bands first proper release, they did in fact release a free album in 2010, called Chariot, which is also apparently phenomenal and leaves much to be expected from this new album.

And if you still can’t get enough of the Cast of Cheers, they’re playing at the Lexington London on the 6th of March alongside Theme Park. They’re also playing a good few more gigs, check their website if you’re interested: http://www.thecastofcheers.com/

http://www.youtube.com/watch?v=sn_UJR3ZRkA – You can view the video for Family here; it’s made up of 5,000 separate photographs which is a nicely creative idea for a video.
Rose Benge