A Chat With Deathstars 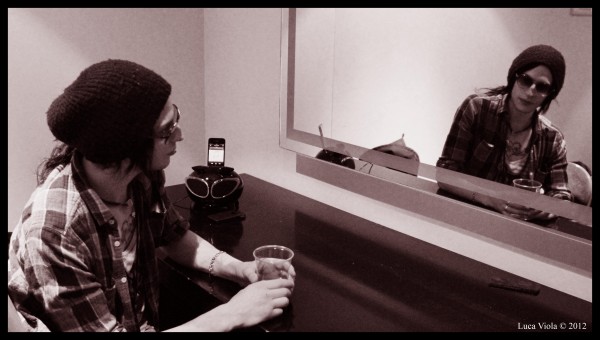 AAAmusic: This is probably the biggest tour to date for the ‘Deathstars’ how are you coping with it?

Cat: oh! We love it, ever since our first show we did yesterday, it’s been a f**kin’ ride and it’s pretty awesome to be here. We were kinda counting on it from the start to be on a tour this big. At least from now on.

AAAmusic: How are ‘Rammstein’ to you?

Cat: Everything is awesome on this tour, everything is set-up before, there’s no question marks, everything is working great, everybody in their crew is super, our crew are super, the ‘Rammstein’ guys of course are super. Their shows are really good, our shows are even better (He Laughs!)

AAAmusic: I’ve been a ‘Deathstars’ fan for quite a while, tell me about the glam bands you have been in before?

Cat: I was so young I was seventeen, when ‘Andreas’ and ‘Emil’ asked me to join the band so I hadn’t been in a lot of bands before. I was playing for a while with ‘Gemini Five’ after that I was playing with ‘Vain’ the old glam rock band, Davey Vain and the others are going on tour again without me unfortunately. Then I had my old band for a while called the ‘Trash Ladies’ and we did record an EP that is still hiding in my closet at home, not to be released. Oh you’ve heard it! It’s very, very sleazy and I think when we recorded that I was fifteen or sixteen years old. That’s the first thing I ever did. At that time I actually had a decent studio at home, at the age of thirteen or fourteen, so ever since that I was in a lot of glam band, playing glam rock and listening to ‘Hanoi Rocks’ and ‘Motley Crue’. I was also doing a lot of digital music in my studio at home with old media synthesizers and other weird kinda digital crap. I consider myself to be an angel of glitter in ‘Deathstars’ bringing it to it. Because before that, they were all influenced by ‘KISS’ glitter and glam rock as well. When I joined the band it got visualized on our show especially. Using a lot of big hair and glam rock poses to things like this, instead of not only the dark side of everything. 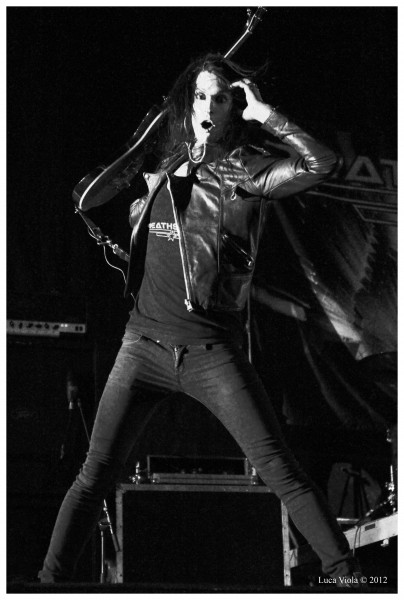 AAAmusic: I once saw a t-shirt with death glam on the front in the ‘Deathstars’ logo how do you think that death glam can compete with fire and explosions?

Cat: Death glam, yeah I remember that t-shirt, I actually think I have one of those somewhere. Well death glam is a totally different thing, even though we have the same kinda sound, we are not the same but with similar guitar riffs.
They have also a dark side but I think we have also more of a rock ‘n’ roll thing, it’s sort of like asking a pop fan how ‘Britney Spears’ can compete with ‘Lou Reed’. It’s two totally different things, for me at least. Rock ‘n’ roll and industrial music and even though we have the industrial influences they are sort of the pioneers of industrial music. I don’t think we’ll consider ‘Deathstars’ to be anything pioneering in industrial music. We are a rock band and that’s what we want to do.

AAAmusic: Would you say you’re the ‘Britney Spears’ of the industrial scene?

Cat: No you said that!, but I can’t say I totally disagree but we don’t take ourselves that seriously all the time, at least I prefer to be a rock ‘n’ roll guy more than anything else.

AAAmusic: You have a signature guitar series out. Can you tell me about those?

Cat: Well we have a signature guitar, well it’s not actually a signature guitar but it’s a model that ‘Ibenez’ is making. That we are sort of, not the face of but we are one of the faces out there for customers to see. The guitar is called ‘Darkstones’ and I love it because it has a glitter body, and that is the reason I chose that particular one and it’s a great guitar as well. There is not a lot to say it’s a cool looking, heavy good sounding guitar.

AAAmusic: So what are the next steps for the ‘Deathstars?’

Cat: Well we have a lot of confidential ideas, but I think the next thing would  be to try to put together a new album asap and then continue touring and making people happy. It’s been a while since the last, we have like a big space, a big gap between all our albums and I think we have to shorten that a little bit.

AAAmusic: Apart from ‘Rammstein’ on this tour what other bands have you enjoyed touring with and who would you like to tour with?

Cat: Well actually we have never been on a tour, that I haven’t enjoyed the other bands. We have been on tour with a lot of bands like ‘Cradle of filth, Sonic Syndicate’ and ‘Marionette’ who are going to tour with us again on our headliner part of this tour. After doing this ‘Rammstein’ thing it seems like nothing is impossible and I can see myself touring with a lot of major bands but a band I really respect and would love to tour with, it’s really hard to say.
Of course I would love to play in the hugest venues in the world and play to 80 or 90 thousand people at ‘Wembley’ or whatever playing our show. That would be great. I’m not the kind of guy that is super interested in other bands, I don’t really enjoy a lot of bands when I’m at home.
I mostly listen to ‘Queen’ and ‘David Bowie’ and those bands that are not actually touring. ‘Brian May’ is one of the people I most like. So touring with ‘Queen’ would be awesome. I love ‘Brian May’s’ riffage and guitar technique. Him and ‘Ritchie Blackmore’ are my two favourite guitar players. They together haven’t really influenced my guitar playing but they have influenced me as a musician and how I think about music and what I would like to do when I hear something, what I like to do with that melody or tone. 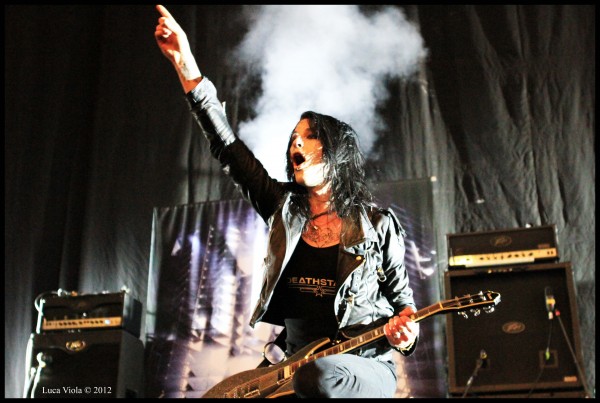 AAAmusic: Glam or Industrial? And explain why! And what three bands of the genre you picked would you pick?

Cat: Definitely pick glam because it’s been around for so much longer, there is so much variety in different bands and music and you know industrial music hasn’t been around for fifty or sixty years like glam has, and that’s why I would really pick glam music if I had to choose. Oh course it would be boring to choose, If I had to take one music genre with me to a desert island, I would choose glam.
I would pick for my three bands ‘David Bowie’ and ‘Queen’ definitely and ‘Iggy Pop’ I would like to put ‘New York Dolls’ and a lot of other bands in there as well like ‘Hanoi Rocks’ and ‘Motley Crue’, but if I had to pick only three that would be my choice.

AAAmusic: So tell me about the new single ‘Metal’ and the new ghoulish image behind the band?

Cat: Oh ghoulish! That was actually ‘Andreas’s’ idea and I thought it was a cool idea. So we just did it and the whole idea behind it was going back to our roots with the whole leather jacket, skin tight jeans and boots like a street gang. A lot like the movie ‘Warriors’ which is a really cool movie and is lovely to kick the shit out of priests and girls in a video, it was really fun to record that whole video. We got to work with real stuntmen in the movie as well, that was awesome.  I got to do some of my own stunts too, like throw a priest over my shoulder and I don’t have any muscles if you look in the video. There is a scene where ‘Skinny’ hits his hand in the concrete floor and the concrete floor is like boom!!! Broken up, because he got skeleton of metal. Like a ‘Marvel’ moment like ‘The Thing’ from ‘Fantastic Four’.

AAAmusic: A lot of people think you’re the sex symbol of the band. Have you done any modelling?

Cat: I have done modelling for catwalk make-up in ‘Åhléns’ ‘Stockholm’ that was probably like six years ago.
I was actually chosen to be in a video with ‘Pink’, actually was in the video but they cut all the scenes with me in for some reason, maybe they thought I was too sexy. Like, oh he looks better than ‘Pink’, we better cut him out. I think sometimes ‘Pink’ looks sexy but I have other favourites and I would say when it comes to female superstars there are a few. I would say ‘Sylvia Saint’ and ‘Christie Marian’, they are porn stars by the way.

AAAmusic: How did you pick the songs on the new greatest hits album?

Cat: It’s quite obvious for me the choice of songs because they are the songs we enjoy most as a band. We didn’t check through any polls about who likes which song and in what countries is this song the favourite. We didn’t do any stuff like this; we just chose our favourite songs, that we like the best. To make it easy for people that hadn’t heard of us before to get one album and go through all of our greatest hits. We all agreed on the same songs there was no fights like I think this song should be there, well most of it was just obvious songs like ‘Cyanide’ ‘Blizkrieg’ and so on, all of those are the greatest hits.