Imperial Leisure – Death To The One Trick Pony 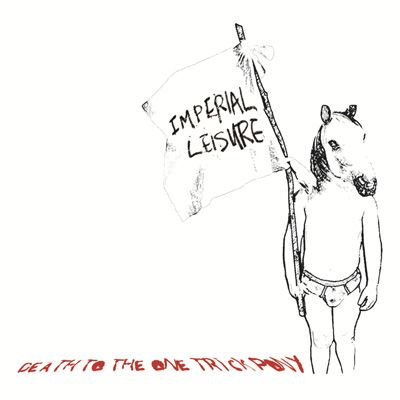 The thing about ska-punk is that I tend to feel rather immature when I listen to it. This maybe because I used to listen to it as a kid, and/or because there was a bit more of a fully-fledged UK ska scene a decade ago – with bands like Capdown, Adequate Seven, and [spunge] being big draws, and of course the US cohorts of Reel Big Fish and Less Than Jake were in their prime. Perhaps, also, the party-fun of all that brass, and the commonly humour-heavy lyrics, can feel a tad juvenile.

That being said, there is scope for bands to produce intelligent ska-punk that is taken seriously. This includes the aforementioned Capdown, but also just take look at how big The King Blues have got – and then there is the criminally underappreciated, progressive ska-punk of RX Bandits. So, which camp to North Londoners Imperial Leisure sit in? Well, they kind of straddle both – and that indecision is their only real downfall.

Imperial Leisure’s first album ‘The Art Of Saying Nothing’ was more inline with the simplistic ska-punk, party-fun route – with silly rapping, pop-vibes and DJ scratching. With their new album ‘Death To The One Trick Pony’ (which was chiefly funded by their fans through Pledge Music), they’ve smartened up. The mood is more serious, the instrumentation more complex and varied. Tracks like single the bouncy ‘London To Brighton’ show that Imperial Leisure are still capable of sassy ska-punk, but for the most part the tracks are grittier. Songs like ‘Number One’ and ‘Can’t Lie’ have a more hardcore feel about them (like Adequate Seven, say), and songs like ‘Bitter Twisted’ and ‘Talk To Me’ contain welcome keys/synths and a progressive structure like RX Bandits – with the latter track containing a fantastic, intricate guitar-line. Ballads like ‘I Thought They’d Love You’ (which sounds like The Killers!), the closing instrumental ‘Song For Paul,’ and, in particular, the wicked ‘All In Good Time’ demonstrate a respectable maturity.

‘Death To The One Trick Pony’ is an album with many plus points – such as the varied tones of ska, reggae, and punk; the clean singing and barking spoken word; and the heavier rock of the guitars. The incorporation of keys and synths is fitting for the majority of the tracks, but whereas they add texture to ‘Bitter Twisted’ and ‘Number One’, they occasionally feel forced and empty when applied carelessly, as on ‘Dancefloor’ (despite the context). As I’ve already said, Imperial Leisure are a much stronger force when they drop their party hats and just make angry, thought provoking ska-tinged punk-rock.

Despite the variety of influences, Imperial Leisure have honed a consistent sound, that will appeal to the party-ska-punk of yesteryear, and the angry political-ska-punk of Capdown and The Kings Blues, as well as old-school fans of bands like The Specials. This new album is finely produced, and features suitable complexity in the music and astuteness in the lyrics. However, a few more hooks would’ve made the album just that little bit more memorable.