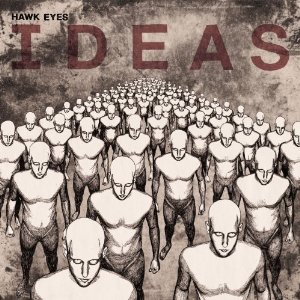 It is honestly incredible what a name change can do for a band. It can show a renewed change in focus, showing that this whole band thing has gone from something for four miscreants to do on Sundays in small towns to stave off boredom to something they’re taking properly seriously and making the most of. Nowhere is this more apparent than in the story of Hawk Eyes, previously known as <Ahem> Chickenhawk. I reviewed their debut album Modern Bodies a couple of years ago and while I marvelled at the technical ability on offer, I couldn’t in all honesty say I liked it as there were no real songs to grasp and remember, just fiddly riffs, screaming, breakdown, fiddlier riff, whispering and then an even bigger breakdown and ending up with the fiddliest riff of the song. (Wait, I’ve made it sound too good…).  Anyway, the new name seems to have brought about a distinct change in song writing style, in the sense that, there seems to be one. These songs are intensely heavy, first and foremost, but then get under your skin and won’t leave for a very, very long time. I guess the layman’s term for this is that they are “Catchy”, but not in any sense that most listeners (Me included) will be entirely familiar with.

Oddly enough for one of the loudest albums I’ve ever reviewed, this is quietly brilliant. It’s an album whose entire purpose is to create a noise that is simultaneously delectable and loud as balls, there’s no idea of mainstream acceptance that’s brought on this change of heart (the album is still roughly 80 times too hardcore for your average rock fan, let alone music fan) and no attempt to be outrageously heavy for the sake of being outrageously heavy, something I accused them of doing on their debut. There’s still Richter scale heaviness, just look at Milk Hog, Headstrung, Yes Have Some and the entire outro to Bears by the Head for proof of that, but Skyspinners could have been nicked off the latest Machine Head album and then had a northern accent and attitude moulded on it. Needless to say it’s utterly boss. One thing that flashed through on the debut was that although his “Scream like a psychopath/whisper like a murderer” vocal style got grating after a while, singer Paul Astick actually has a very good singing voice, one off the true pleasures of this record is hearing more of it.

In all, this is damn good. The kind of record that manages to juggle sounding like an excellent album from start to finish but also something that, when one imagines what it could sound like live, could cause paroxysms of excitement in those less prepared. Bring some earplugs, you’re going to need them, Hawk Eyes have made the metal album of 2012.