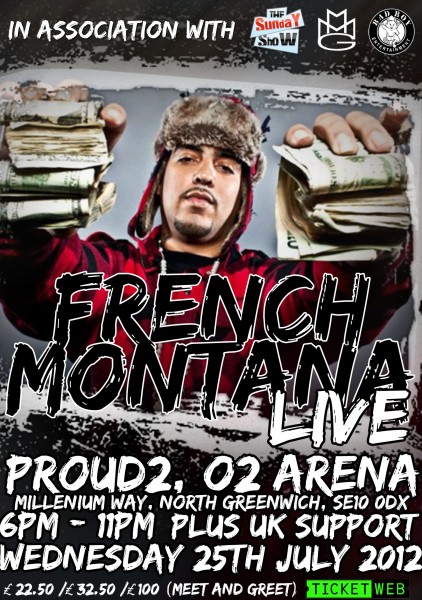 Maybach Music Group & Bad Boy Records have teamed up with Sunday Show to introduce French Montana to the UK live for the first time. On Wednesday 25th July 2012 @ Proud2, O2 Arena, SE10. French Montana will be performing his international hit record ‘Shot Caller’ as well as ‘New York Minute’, ‘Stay Scheming’ and ‘Chopper Chopper’ and all his songs from his successful mix tapes ‘Coke Boys’.

French Montana will be releasing further singles featuring Rick Ross and Akon in the coming months which will surely cement him as one of the most highly anticipated Hip Hop acts to perform in the UK in years.

Diddy – “His work ethic, his song-making, the effect he has on the youngins. If you ever been to one of his shows, every time he drops a record. Also, it’s important, I’m from New York, you know what I’m saying. I rep New York to the fullest. And for real, for real, can’t nothing move in this city without us being a part of it.”