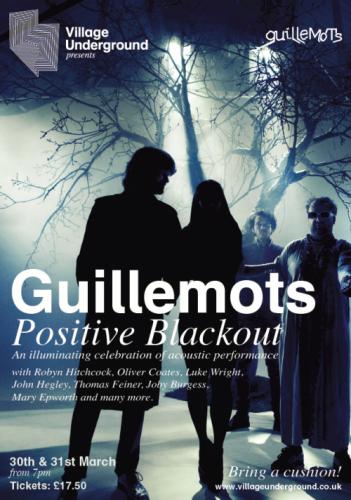 On 31 March 2012 at 8.30pm the global skyline will be plunged into darkness as hundreds of millions of people, landmarks and businesses across the world switch off their lights for a world with a brighter future.
WWF’s Earth Hour is a simple idea that’s become a global phenomenon, spanning a record 135 countries in 2011. It’s a symbolic action to show we all care about protecting the environment and reducing our impact on it.
Jennifer Crago, Communciations Manager at WWF says :“We are really excited to have Guillemots hosting an acoustic performance in an intimate candlelit setting on the night of WWF’s global Earth Hour event.”
You can find out what’s happening across the country and get involved by visiting www.wwf.org.uk/earthhour
Fyfe Dangerfield from Guillemots commented…“Earth Hour is an inspiring and powerful idea and we’re really pleased to be supporting this global-wide event. Get involved and turn your lights off!”
The celebrated London-based experimental pop group will host ‘Positive Blackout’, two nights of purely acoustic performances at Village Underground, London on 30th – 31st of March
Links
Mixtape
http://soundcloud.com/villunderlondon/positive-blackout-a-mixtape-by
www.wwf.org.uk/earthhour
www.villageunderground.co.uk/events/positive-blackout
www.guillemots.com
www.facebook.com/events/349157101795781

Submit your favourite videos here to the Village Underground Youtube

More information about Guillemots and Positive Blackout
The celebrated London-based experimental pop group Guillemots are hosting two nights of purely acoustic performances at Village Underground on 30th – 31st of March.
Fyfe Dangerfield and his band will be performing a very special live and unplugged set, featuring new and old songs, within an intimate candlelit setting in the Victorian warehouse interior of Village Underground. Over two consecutive evenings Guillemots will co-curate a magical and varied line-up of music, performance and spoken word inviting friends and like-minded artists to join them.

Positive Blackout will be an evening dedicated to the purity of acoustic and will showcase artists whose magic extends beyond, without the need of microphones and a powerful PA.

And by acoustic, don’t read gently strummed guitars and lyrics about heartbreak. These two nights will range from psychedelic songwriting legend, Robyn Hitchcock to cutting edge cellist Oliver Coates. From the punk-poet laureate John Hegley to the delicate soundscapes of Thomas Feiner. From psyche-soul chanteuse Mary Epworth to cynical balladeer and Aisle16 poet Luke Wright. More treats are also being planned including Britain’s most diverse percussionist Joby Burgess to clog dancing and modern folk under the working title: “Grand Ole English Opry”. Each artist will be invited to perform a 10-30 minute set with Guillemots putting in solo appearances of their own in between. Then the full band for take to the stage each night – completely unplugged. Fyfe will kick off with the first set at 7.30pm so get there early!

“This is something we’ve wanted to do for ages”, says Dangerfield, “and Village  Underground’s the perfect place to do it, the room just has an aura to it as soon as you walk in. I love  the idea of gigs like this where there’s nothing to hide behind. It’s that bit more personal and dynamic for everyone.”