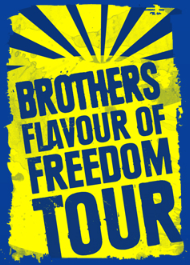 Brothers Cider is proud to announce the ‘Brothers Flavour of Freedom Tour’ in association with Strummerville. Born at Glastonbury in 1995, Brothers, the original pear cider will be hosting a series of warm up gigs from some of the most exciting musical talent due to hit the festival circuit this summer. The events will be completely FREE and will take place from 3rd to 19th May 2012 in towns & cities around the UK.

All the bands will be making an appearance on this year’s event circuit playing at festivals including Secret Garden Party and Bestival. The ‘Freedom Tour’ provides a fantastic opportunity to see them in advance completely free of charge. The tour will take in the cities of Bath, Southampton, Plymouth, Bournemouth, Newcastle, Nottingham, Preston and Liverpool.

The first leg will kick off with four dates in the South. London-based 6-piece Molotov Jukebox bring their explosive mix of provocative pop, featuring the sultry vocals of Natalia Tena. Meandering through gypsy, swing, via Latin soul, calypso, disco and even dubstep, the group’s whirlwind style has led to widespread critical acclaim with Xfm’s Eddie Temple Morris anticipating “world domination with dancing.”

Wise ramblings, honest love songs and no holds barred social commentary from Beans on Toast have made this disheveled mastermind a firm regular on the festival circuit. As comfortable in a front room as he is playing Wembley Arena and with three critically acclaimed albums under his belt Beans on Toast will provide a set not to miss.

The Supernovas round the first leg off with their jagged, angular 21st century rock and roll. Skank-fuelled and culture-crossing, they snarl their way across each track with aplomb and conviction.

Beans on Toast then breaks away, taking the party up North to hook up with rising stars Crowns and The Dinhitting Newcastle, Preston, Nottingham and Liverpool. Crowns deliver their Cornish shanty-esque folk-punk racket, crashing mercilessly from verse to chorus leaving little room to catch your breath. Feted by the likes of Radio 1’s Zane Lowe, Mike Davies and Xfm’s John Kennedy the lads have just released their self-titled 6 track EP.

The Din began their odyssey in an old disused bleach factory. Now living in Camden Town, London, their sound has evolved, incorporating gypsy-jazz, eastern-European and middle-eastern traditional music, whilst retaining the melodic alternative psychedelic pop from which it was formed.

Brothers Managing Director, Matthew Showering, said: “We are always looking for ways to support Brothers stockists and offer something unique to our fans. Joe Strummer used to visit our bar at Glastonbury, so it’s our pleasure to support Strummerville and the opportunities it gives people through music. The ‘Freedom Tour’ presents the perfect opportunity to showcase some of Strummerville’s best talent, offering our fans the chance to see them first before they hit the festivals – completely free of charge.”

Strummerville is a registered charity that gives opportunities to aspiring musicians and support to projects that change the world through music. The charity also runs a special projects fund helping homeless and vulnerable people through music, developing music communities in the UK and Africa and much more.

Crowns, Beans on Toast, The Din: 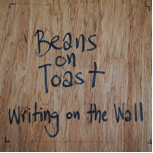