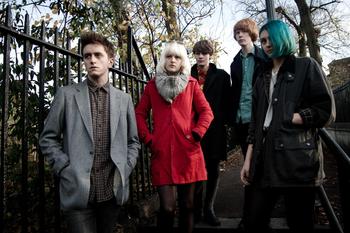 Evans the Death are all set to release their self-titled debut album on Monday 2nd April 2012 via Fortuna POP! in the UK / Europe and Slumberland Records in the US. Filled with twelve blistering tracks they weave a distinctive magic, coupling main songwriter Dan Moss’ gift for melody with Katherine Whitaker’s unique vocal mannerisms. The songs both document and channel the exuberance of youth via the prism of five pop music obsessives and were recorded late Summer 2011 with producer Ex-Test Icicle and current Warm Brains man Rory Atwell (Veronica Falls, Male Bonding, The Vaccines).

To celebrate the album coming out the band will be holding a FREE album launch gig on Thursday 5th April at the Seabright Arms in Hackney, East London.

If you can’t make it to that then they’ll be playing various gigs and festival over the coming months.

Evans the Death give away another free track... 3 April 2012 | aaamusic