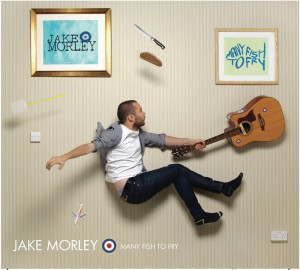 Jake Morley is a London singer-songwriter, floating in the realm of Ben Howard, Ed Sheeran and other associated acts. In such a saturated market it can be hard to stand out and compete. Luckily, Morley’s lap tapping and guitar combo has given him a trademark to set him apart from the abovementioned acts.

Besides lap tapping, Morley uses a diversity of sounds and instruments, including distorted electric guitar and gospel-esque vocals, especially on his single Feet Don’t Fail Me Now. That alongside his upbeat style makes for something a little different alongside the masses of singer-songwriters. Although his cheerily melodic guitar is rather reminiscent of Jack Johnson, especially in I Saw Something. There’s something about the carefree harmonies and strumming guitar which screams it. That and his lyrics: there’s something in ‘I’m a choc-chip cookie, dunk me in your tea’ that reminds me of Johnson. I just can’t call this unique.

The sloppy lyrics really don’t convince me that this is a brilliant album. Sure, the album possesses some nice melody and harmony construction, but I can’t quite get past some of the lyrics on here.

As musically well-written as the album is in places, the lyrics really do bring a downer on the entire album. Some of the lyrics are downright childish and it feels like just a little bit of extra thought in the writing of the lyrics would have gone a long way. I think maybe Morley was going for a childish endearment, or perhaps a sense of tongue-and-cheek, in the lyrics as one of his unique selling points. However, I don’t quite think he’s managed to pull it off.

On the other hand, Morley makes good use of gospel-esque vocals in the Light and Feet Don’t Fail Me Now. And his lap tapping and melodic guitar are what really carry this album. Musically: not bad. Lyrically: well, not good.

Oberhofer & Fanzine play Co-op gig at The CAMP in April