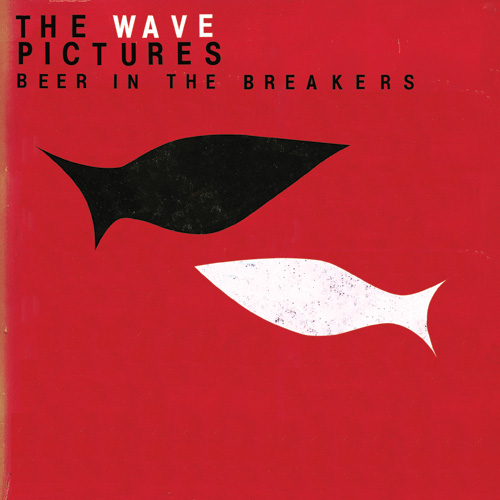 Mid-mourning the end of Japanese Voyeurs, I should find reviewing confessional “anti-folk” pop should be the most onerous task imaginable. But lo and behold, The Wave Pictures have managed in ‘Long Black Cars’ to create something that is not only listenable but enjoyable to me. Perhaps it’s the to-the-point and unpretentious nature of their music: plain and simple stripped-back songs written by introspective young men and unashamedly so; perhaps it’s the wry sense of humour that keeps the heartbreak afloat, but in actual fact I can highly recommend this.

Even the opening track, ‘Stay Here And Take Care Of The Chickens’ is a real attention-grabber: a dark folk pop the likes of which is rarely achieved. Bouncy yet dogged bass and jaunty drums, and some truly whimsical clean guitars are the backdrop for one of the darkest pop choruses I have heard this year: you’ll sing along at least five times to this song before realising that you’re stealing someone’s tale of repressed hate. But despite the malevolence, there’s a sharp-toothed wit in the poetry, knowing tone and sunny sound that creates one of the best opening tracks so far this year. This continues into the strangely funky country folk of ‘Eskimo Kiss’, which hits the listener with excellent guitar that sounds like a spaghetti western unfolding in the mind of a Belle & Sebastian fan.
Songs like ‘Tessa Buckman’ and ‘Seagulls’ hold a surprising amount of wit and bitterness considering their sunshine-pop sound. The former sounds vaguely like Frank Turner with all evidence of massive bravado stolen from him, and despite its slightly limp first impressions (that chorus, oh dear) the verses complete with film references and moments of startling imagery: “my skin like milk with a fire across it” lift it into something else, and the sheer insistence of its gentle deathmarch bassline creeps into the dark corners of even the most committed anti-romantic’s heart. The sunny jangling of ‘Seagulls’ at first sounds ill-judged, but the continued film references, skewed poetry, and subtle spleen all evident in the lyrics balance it out, and the cheeky country style instrumental complete with cowbell and in all honesty some great guitar adds panache and variation to the song, an odd disturbance to the slow folk style that fits the subject of the song. And ‘The West Country’ is almost heartstopping on close listening, a glacial instrumental that jangles guitar strings almost as much as it jangles the soul of the listener, with well-matched slow bleakness in sound and subject.
Speaking of lyrics, the bleak cheekiness of ‘Never Go Home Again’ is the most squalid, most charming anti-romantic love song ever, with handclaps and harmonised vocals backing a tale of displaced empty souls drawn to one another as they are star-crossed not with each other but with hollow disenchantment. Or ‘My Head Gets Screwed On Tighter Every Year’, driven entirely by its captivating narrative and the way it is told, after a quick bass intro comes “we’re in the same boat brother, if you shake one end you’re going to rock the other,” and what else could you want from an album of aimless frustration told in the most charming manner. And the closing title track ‘Long Black Cars’ is just excellent in its impossibly sunny bleakness, and once again a real gift for lyrics throughout.

The Wave Pictures have created something both wonderfully unpretentious and highly poetic, with musicianship that’s both basic and incredibly well-done. And to cap it all off, they don’t half know how to write a song. ‘Long Black Cars’ is a slow-burning treasure trove of genuinely engaging songs that if nothing else has enthralled this nasty little rocker sitting here, and is easily one of the best surprise successes of this year so far. Put aside 40 minutes of your life and I can pretty much guarantee you’ll find something to reward you.