A Chat with Midori Hirano – MimiCof 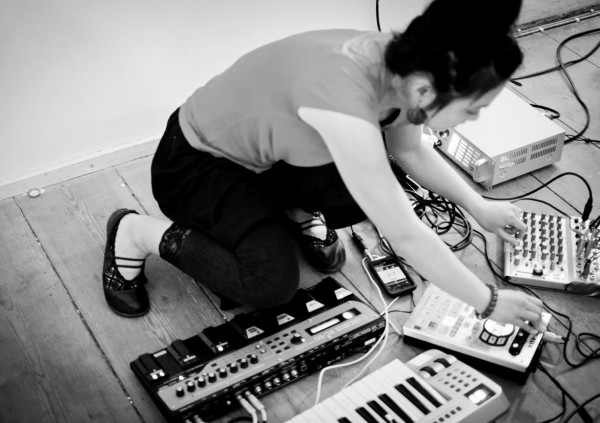 A Japanese electronic mind in Berlin.

I met Midori in Pisa, Italy on November 2009, when she came to my hometown to play a concert for our music promotion project called Stazione57.

Midori is a delightful artist with classical piano studies background, now dedicated to create electronic sounds. She left Kyoto to find in Berlin the right environment to develop her music style.

I still remember, it was her first time in Italy and she was very excited about it. However, her timid, respectful and balanced behaviour was always there, reminding us the beauty of different cultures.

I fell in love with her first projects, one EP and two LPs of genuine experimental-electro-ambient where delicate minimal sounds design beautiful little melodies. You would want to check out: Poet At The Piano (2004), LushRush (2006), Klo:Yuri (2008)

Midori is now, about three years after, promoting her new project called MimiCof, more electronic and beat oriented. I met her in Berlin few weeks ago and we had a lovely chat.

AAAmusic: Hi Midori, how is the life of a Japanese musician in Berlin and why have you decided to move here?

M – As a “musician”, it has been comfortable for me to stay in Berlin because the city is compact and condensed enough to access to so many different kinds of concerts and art related events and also its low cost of living. And I can easily get focused on what I want to do since the time seems like going a bit slow here. Everytime I go to the other countries or cities for a while, and then come back to Berlin, I always feel strange but comfortable at the same time.

And talking about as a “Japanese”, it goes much more complicated. It means that you have to take so much energy and time to work on paper stuff to keep your Visas and keep learning languages and so on. But you can get freedom instead of this hard work, so that’s why I’ve been trying that. Other than such bureaucracy stuff, I’m enjoying being completely a foreigner in different cultures and with different languages, and it makes myself simpler and clear.

But if you combine both positions like as “Japanese musician”, it sounds too complicated or nothing for me at all :)

AAAmusic: Your label is Japanese and you perform in Japan sometimes. What are the differences in the music world (live shows, audience…) between Europe and your home country?

M – The big difference is the entrance fee. Especially for this kind of music I’m doing, the average of the entrance fee in Japan is like 25€ – 30€, or sometimes it costs more. Compared to Berlin, its almost more than double(but I know Berlin is still cheaper than the other cities in Europe). This is simply because the organizers have to pay lots of money to use venues for concerts and of course for the musicians too. So it’s hard for both of promoters and audience to keep doing and coming to shows in Japan. But we don’t have so much of financial supports from our own government for such cultural events compared to European countries, we really have to deal with this kind of financial situation and this is how it is.

AAAmusic: Can you tell us about the evolution of your music? What is the new project named MimiCof?

M – MimiCof is focused more on the electronic side compared to my older moniker as midori hirano which contains lots of acoustic instruments. I have actually been listening to so much of electronic (+ club) music since when I started making music with a computer around in 10 years ago, but I never thought that I make those kind of stuff as my own music. But after I made two albums as midori hirano and then moved to Berlin, I started feeling familiar with club music and thought it wouldn’t be a bad idea to try to make something like that on my own, and then it ended up a pretty good idea. I just made a few of demo tracks, then uploaded to my SoundCloud – and then I had an offer from nik of PROGRESSIVE FOrM label who found and liked those tracks. This is actually how I started recording for RundSkipper.

AAAmusic: Why the need to change your music direction?

M – Because I felt like that I wanted to do something different or new as my life is going on in Berlin and saw different kinds of music and people here. But this doesn’t mean that I completely stopped my old style as midori hirano – probably I’ll want to go back to work on it after a while, not sure when it will be though. It’s like a life change as you sometimes do depending on what kind of period you are in.

AAAmusic:  Your last album under the name MimiCof, RundSkypper, (June 2011) received good critics. What do you think about your work?

M – I’m pretty happy with what I did on RundSkipper, especially because this is the first release of my new project MimiCof which also has four remixed tracks including the one done by a good friend of mine Frank Bretschneider whom I’ve been respecting also as an artist since a long time ago. I think I really saw another possibility of my music after making RundSkipper and it improved my creative process too. Also I enjoyed so much cooperating with another good friend of mine Masayoshi Fujita who lives in Berlin too for one of the track “Hills in the Ocean” – he played the vibraphone with well understanding of sound elements I wanted to depict.

So I can say RundSkipper has so much experiments with other people, and lots of challenges dealing with electronics for myself.

AAAmusic: How do you approach to music writing? Are your compositions influenced by personal events? How do you start composing songs?

M – I always get hints from little sound samples I’ve made time to time. And then put those in the sequencer and try to embody all of them in one sound context. It often takes me a lot of time to finish each tracks depending how I feel with the process on the creation. It’s always not easy but I try to enjoy them all. I’m sometimes influenced by music from someone else I found great too. So my music is always reflected by music itself rather than my personal events.

AAAmusic: What inspires your music? What are your favorite bands/musicians and which of them actually influence your work?

M – I have too many to write them down, and my favorites are often changing.. but in these days, I’m listening to Marc Leclair and Sun Glitter’s albums so much.

AAAmusic: Recently you appear in clubs in Berlin performing your DJ set. Can you tell us more about this experience?

M – I do DJ just for fun since I have lots of favorite musicians, and always happy to play songs from them to share with people. This is all about that.

AAAmusic: On 2008 you played at Café Oto in London. What is your memory about this City? Would you like to come back and perform here?

M – I remember there was pretty nice and relaxed atmosphere at Cafe OTO.  As long as I was staying there, I could forget any noises or loudness from outside in that big city.

AAAmusic: I read you cooperate with other artist. How is the experience of music duo/cooperation?

M – I find it interesting because I could find and get something new in the results which must be impossible to create by myself. Usually I’m a bit control freak on my own music though, so it is sometimes pretty fun experiences for me to collaborate with other artists to make myself “socialized” in a musical way.

AAAmusic: Are you working on new material at the moment?

M – Yes, I just started recording for MimiCof’s new album which should be released in this autumn from PROGRESSIVE FOrM.

AAAmusic: What is music for you? What is your goal/dream about your music career?

M – My aim of creating music is to put a way to communicate with people and the society itself rather than just to become famous nor only to make myself happy. Since making and releasing music often feels me more like a self-satisfied actions, so I always ask myself why I want to keep doing this and want to know how much of Joy I can give to the people with my music.

Maybe there are no goals about doing music, but just to keep creating new.

AAAmusic: Ok, last question, do you plan to perform in London in the near future?

M – Unfortunately I don’t have any plans to have concerts there yet, but I hope it comes soon.

Thank you so much for your questions, Pietro!

Thank you very much for your time, Midori, and see you hopefully soon in London.