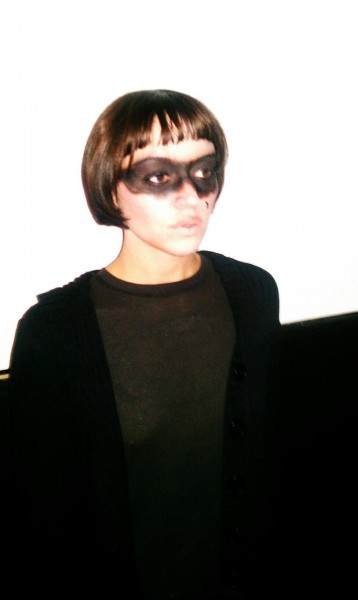 My friends, the current generation of hipster has reached its zenith, and the result is a certain Ana Lola Roman. Hailing from Williamsburg, sounding like Dalston’s dark electro scene on a Saturday night, and owning a Tumblr..rr.rrr.r… page, Ms Roman’s sleek, witchy synth tracks and reverb-drenched vocals should sum up everything I wish to scurry away from. So it’s a pleasing surprise that ‘Keep It Mellow’, for all its aloof posturing, is actually a rather compelling record.

The shouted intro to title track ‘Keep It Mellow’ is a bit of a red herring, but also entirely accurate in just surreally placed it is, as it is subsequently engulfed by skeletal industrial beats and woozy synths and Roman’s witchy croon, which holds an alluring similarity to the glacial purr employed by Siouxsie on the Banshees album ‘Peepshow’, and Roman’s tracks hold the same surreal dreamlike quality as that album, with the looped clattering strangeness of the first track leading to the icily seductive slow techno dance of ‘Decode’. Things are less utterly unapproachable here, as the Siouxsie-style vocals are paired with a lush synth composition that brings to mind Gary Numan in the synth tones used, but with a glammed-up stomp to the beat that means that even if it is too slow to dance to in many situations, goth clubs are liable to lap it up as their 2 a.m. grind-against-a-stranger track. (Trust me, we’ve all been there.) To hold its four-minute loping progress, whispers of piercing yet silken strings and Asian-sounding flute trills are introduced, and the resulting patchwork is a hypnotic cybernetic psychedelia that somehow manages to hook the listener in.
And finally, we have two versions of ‘No Architect’. The spook-queen pretenses are dropped here, and what we have are for all intents and purposes a woman who clearly loves Siouxsie Sioux but more importantly shares that same absolute love of music, as she has managed, in three tracks, to move from a fascinating abstract collage on synth weirdness to a strong synth-pop number that is atmospheric but also bustling and incredibly catchy in its own way, with a tasty earworm of a keyboard melody that underpins and drives the track with even more strength than the energetic handclaps and danceable drum beat that lend it an infectious momentum. The extended version is less “pop” and more artsy, with a greater emphasis on the orchestration of the instruments and putting together an atmospheric collage of vocal parts, but the same ear for melody and dark vitality sparks off the song.

In all honesty, given that ‘Keep It Mellow’ sounds like ‘Anima Animus’-era Creatures, or an electro offshoot of Siouxsie & The Banshees’ ‘Peepshow’ there was little doubt that it would appeal to me, but actually Ana Lola Roman has created something with its own distinct voice and passion. Yes it is a bit out there, but if that scares you, listen to it backwards and then the right way round, and that way you get to access a four-track voyage from the outer limits to the heart of leftfield pop. Mildly pretentious yes, but wholly worth it.