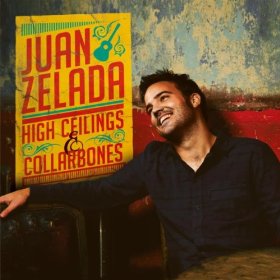 Oh dear. You see, there’s nothing categorically wrong with Juan Zelada’s ‘High Ceilings And Collarbones’. It is well-played, with a good voice, and put together with a studio gleam that indicates quality more than anything. But there’s something about this rootsy bluesy reggae pop songwriting that just fails to resonate.

Sometimes it hits home. Opening track ‘The Blues Remain’ is where the cleaned-up blues Zelada peddles really works. There’s no grit or sweat, just laconic summer days at a tuneful piano and organ, all ornamented by a luxuriant horn section and led by warm blue vocals and as the song progresses, a backing choir. 100% summertime pop and really very effective. But the next track ‘Breakfast At Spitalfields’ is where it starts to wobble. The acoustic guitar singer-songwriter romanticism doesn’t marry to the gospel blues size of the rest of the instrumentation, nor does it sit well with the entirely low-key and even trivial lyrical matter, so the instruments are kept watered-down and the material feels a bit too… “bigged up” so by the time the middle eight and final chorus swing round, the instruments are monotonous and the song itself a bit overdone. ‘Baby Be Mine’ tries to redress the balance with a big old love song that boots in a stomping percussion and bassline that are an excellent roots backbone to an otherwise trite song that I would rather have as an instrumental, as the song itself distracts from some very, very good musicianship. Ditto with ‘Open Up My Eyes’, soulfully trite. On ‘What Do I Know’, either half could be a really good song: reggae soul pop sunshine and poppy singer-songwriter, but there’s a gap between the two that can’t quite fit together until the last minute or so of the song, where the band and the man click and there’s a brief insight into a pretty solid potential unit.
There are other moments where the two gel. ‘Elsewhere’ combines the sunny pop with melancholy blues, injecting a cod-reggae syncopation to the hop-skip hi hat heavy rhythm that gives it a slinky smoothness, helped by Zelada’s incredibly clean vocal style and the sweetly distorted guitar riff. And helped by its predecessor’s eureka moment, ‘Barman’ is a lazy slice of poetic London town Motown that is as smooth and tasty as you’d want. Then we get the stripped-down, soulful ‘Boy With The TV On’, which aches to be a bit more than it is, really. Tender, acoustic, poetic, and even climactic, I would volunteer this as a great EP track with some of the other standout moments, as it gets a bit lost amid the patchy material due to its understated charm. ‘Four Days’ even scrapes the glorious funk of Motown’s finest, but at the eleventh track, all to late for a comparative gem.

The thing is, again, I can’t explicitly fault Juan Zelada. His voice is superb, and the band are undoubtedly talented. It’s just that for me, there’s nothing to stop me shelving ‘High Ceilings And Collarbones’ alongside Mumford & Sons and the other artists and groups that make agreeable background music but no real heat.