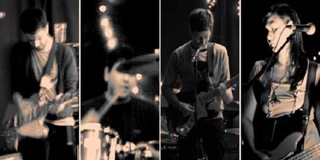 Dead Wolf Club celebrate the release their second single from their debut album with this very special Super 8 style video and free download of Wave.

The video was filmed and edited by talented film maker Sophie Achillini, capturing the bands travels and surfing on a San Diego beach.

The band are also delighted to announce a number of festivals and shows for the summer.