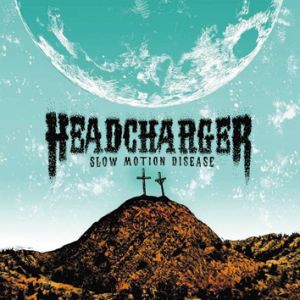 I’m not a massive metal fan, so I’m almost certainly not the target audience for Headcharger’s latest album, Slow Motion Disease. However, from a completely impartial musical standpoint, it just isn’t very good. In fact, it’s mostly awful.
All the problematic hallmarks are familiar from the opening track, All Night Long. The cringe-worthy, supposedly ‘badass’ guitar riffs, that are as tired and derivative as the embarrassing shouting that punctuates certain gaps in the vocals. The melody largely consists of the same note over and over again, and it is sung with the standard metal sound of someone trying to sound aggressive and charismatic…and failing. The lyrics make Dan Brown seem like Lord Byron: “Let’s drink it. Let’s do it. Open the door. Get on the fucking floor.” The chorus is as equally dull as the verse, and there is a standard guitar solo that adds little to the minute dribble of musical amusement on offer.
Depressingly, there are eleven more tracks to go, so I shall keep this brief. Don’t Need You is even worse. The vocals descend into the familiar metal effect of an imbecile attempting to compensate for his minute genitalia by grunting as aggressively and unmusically as possible. I’ve never understood why metal musicians think this sounds dark or intimidating – to me, it resembles some feeble little kid having a tantrum on the living-room carpet, spewing and spluttering incoherently about how mummy didn’t get him the ice-cream he wanted. Musically, the song is dull and predictable – more of those repetitive, clichéd guitar riffs, another utterly forgettable melody and standard pop song harmonies.
And the award for worst song-title ever goes to Using People As One of the Fine Arts. As a sentence, it may not make any sense, but it is an accurate representation of how rubbish the track is. The lyrics are completely inaudible, which is probably a blessed relief. Musically, the song could be a continuation of the previous track and no-one would notice – it’s all so basic and formulaic. More of the same comes with Fires of Hell. It’s another unintentionally apt title, although perhaps a bit violent considering I’m drifting off by this point. Should be Running does little to rouse me, and judging by the title Dusty Dreams, perhaps the effect is intentional. Perhaps the band thought to themselves: “Let’s create the ultimate sleeping aid by repeating ourselves, over and over again, until people happily lose consciousness.”
The Life of A… finally changes direction, at long last. Acoustic guitars come as a blessed relief. Unfortunately, it’s not really a song; just a bit of simple and repetitive improvisation around some agreeable chord sequences, that could happily be recreated by any amateur guitarist. Ironically, it’s still the stand-out, superlative highlight of the album so far – relative to the bilge that has come before, that is. Drifter then immediately abandons this alternate sound, and returns to the same mind-numbing metal shtick that is now oh-so familiar.
As for the last four tracks: Spain Summer Sun plumbs new depths of lyrical banality. The opening riff of XIII / XII sounds so much like all the other riffs on the album that now I’m sure the band is taking the proverbial. This is confirmed by the title of the following song Annoyin ‘n’ Noisy, as perfect a summary of this album as I can come up with myself. Even worse lyrics abound: “I’ve learnt to live with contradictions. And I will dare there will not be any revolution.” Drivel.
The final song is the title track, Slow Motion Disease. A decent acoustic guitar riff opens up into a reasonably atmospheric and affecting ballad that comes as a huge surprise. It may not be anything earth-shattering, but it is far and away the best track on the album. This is due to the fact it avoids the tiresome metal clichés, and instead goes for a much more beguiling and musically polished folk-influenced style. Oh, if only it had all been like this!