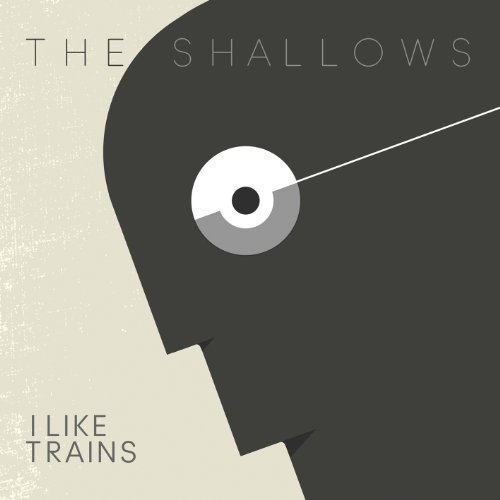 Simple, unpretentious and evocative electronica mixed with alternative rock is the order of the day on The Shallows by iLiKETRAiNS. It’s not an unpleasant album to listen to, but neither is it a particularly memorable one. The best impression I can give of it is to say it plays along nicely enough in the background.
In fact, many of the songs have that effect of dreamily chugging along like a steam engine, perhaps a hint as to why the band are named as they are – although almost certainly not. This is however indicative of one of the problems with the album: all of the 9 songs are somewhat overlong and samey. If you play an instrument or understand harmony, you’ll start to notice the same chord sequences rearing their heads over and over again. The songs all go for kind of the same sound as well – psychedelic synths and gently declaimed vocals mixed with light electric guitar and repetitive bass patterns.
Sometimes this combination is more effective than others, as with the opening two tracks, both of which work much better than the third song (and title track) The Shallows, which is dreary and turgid throughout. Water/Sand is yet more of the same, but works well thanks to some minimalist textures complemented nicely by impressionist harmonies and hypnotically repetitive guitar and percussion riffs. Compared to this, the more pop friendly style of The Hive comes across as banal and lacking in atmosphere. Fortunately, The Turning of the Bones returns to a more understated, dreamy riff orientated groove, and proves to be one of the most memorable numbers on the album, aptly fitting its picturesque title.
In stark contrast, at six minutes Reykjavik is overlong and uninspired throughout. It seems iLIKETRAINS are much better when it comes to shorter, more atmospheric pieces steeped in simple psychedelia, as opposed to extended, more dramatic and emotional numbers which owe a greater debt to pop. This is proved again with We Used To Talk, a subtle but evocative number, replete with bleak minimalist textures that complement the stark vocals very effectively. Final track In Tongues provides more of the same, gradually building up in texture very dramatically and channelling the Pet Shop Boys even more noticeably than the rest of the album.
All in all, it’s a reasonable effort from a band that clearly feel they have discovered the sound that they wish to hone in on. However, in future, it would perhaps be beneficial for them musically to venture out of their comfort zone a little more than they do on this record – as otherwise, it’s hard to see a way for them to progress.

Young Hines – Give Me My Change