The buzz behind the Modern Faces. 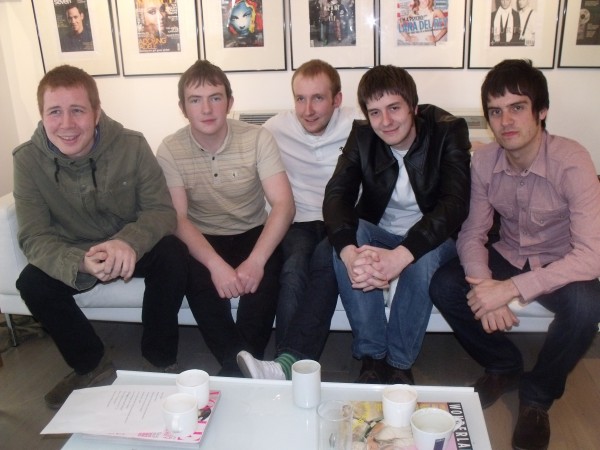 The buzz behind the Modern Faces.
One thing that puzzles me about the Modern Faces is how have they done so well when they hadn’t releasing any material. Kasabian’s singer a fan and they have had quite a lot of major tour success with supporting his band, the Charlatans, Shed Seven, the View plus countless other bands including the Twang who they out drunk and out partied every night which was a hard thing to do. They have really spread their live legs and have engaged with the audience and gained a new face base, even when they have had tricky large venues to conquer like the Manchester Apollo which can be quite daunting for any new band.
Who are the Modern Face about.
Modern Faces are a hard working band doing most of their promotion themselves which is really starting to pay for with their debut double A side single ‘Scroll and Cynical Brother ‘ finally coming out on very limited 7’ vinyl which is going to be a sell out with worldwide demand for the record already from country far across the world and this shows why this band have been on the tip of everyone’s tongue they mix the 90’s Manchester sound as bands such as Oasis but bring a fresh new life to it to.

What do the band sound like.
Their is a bit of a Brit pop revival on the cards at the moment with the comeback of bands like the Stone Roses, The Charlatans and the Happy Mondays and I think this band fit in well with that. They mix the balls ‘y rock n roll sound of Oasis with the confidence to deliver a good live attraction. The vinyl has a very nice vintage feel around it look like all the old heavy duty records of the 60’s and 70’s and really progresses the feel the band want to portray. The band have just played a headling UK selling out in their hometown in Scotland and all the venues in a 30 mile radius in a record quick time and the rest of the tour selling really healthy to and are set to embark on tours in countries where the vinyl sold really well like Hungary and Japan. The band would most love to play at Disneyland in America or Universal studios were Jaws pops out the water. After the tour the bands two main song writers will be working on new material for the album. There has always been a good dynamic in the band they all went to school in Dunfermline in Scotland where they had music and fighting in the local venues in common. They eventually got talking and had so many things in common including a love for Oasis, Stone Roses and the Black Keys. They are also looking forward to festival season.
I think Modern Faces could make it really big and are a band defiantly a band to watch so look out for their new album hitting the shops soon.

A chat with The Rasmus

A Chat With Charlie Hedges