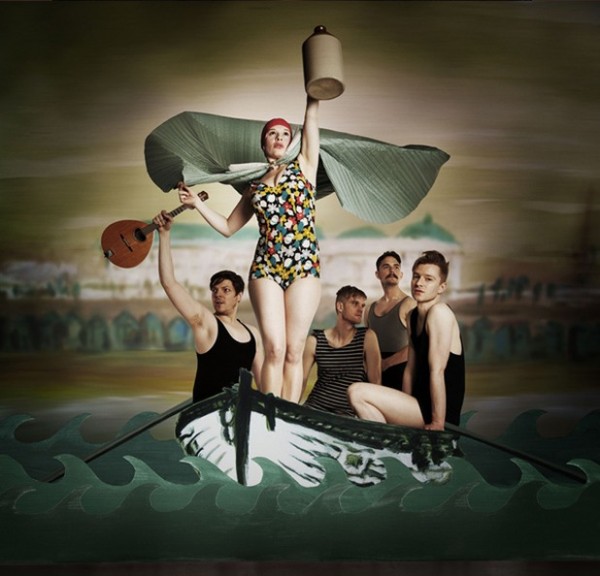 “Skinny Lister are reel-y good… They give fun a good name.” The Guardian

The hardest working in band in Britain, who last year clocked up more festival appearances than any other artist, are proud to announce the AA single Rollin’ Over/Coloursto be released on Monday 18th June. Coming out a week after Skinny Lister’s debut album Forge & Flagon (Monday 11th June), Rollin’ Over and Colours are a further taster of what’s to come following debut AA single Plough & Orion/If The Gaff Don’t Let Us Down.

Skinny Lister are Daniel Heptinstall, Lorna Thomas, Maxwell Thomas, Sam Brace and Dan Gray who came together in the summer of 2009.  United by their love of folk, jigs and the outdoors the band have been riotously swinging the festival scene since day one, notching up an impressive 30 festivals last year.

The band soon came to the attention of festival impresario and all round good egg, Rob Da Bank, who welcomed Skinny to the family fold and his Sunday Best Recordingslabel, who are now pleased to put out this double a-side 7-inch picture disc single.

Rollin’ Over is the quintessential British folk song, stomping, rich and melodious. It’s a roaring, tankard-thrusting trip through the hills and valleys of the countryside in summer, marked by its accordion-led verses and the all-in-it singalong chorus. “War is over, I’m no longer a soldier as I roll, roll back to your side!” the band call out in a song that’s guaranteed to cause a stir wherever it’s played.

AA side Colours is a calmer affair, dominated by Lorna’s sweet vocals, reserved acoustic guitar and mandolin, and speaks with more than a hint of nostalgia of “hands stained red from blackberry picking”. It’s a farewell of sorts to the carefree sunny days, and what a way to go about it. Forget the wannabe folksters that have dominated the charts with their imitations for all too long. This is a celebration of the traditions passed down, perhaps the most genuine and authentic folk band performing today.