Gaggle – From The Mouth Of The Cave 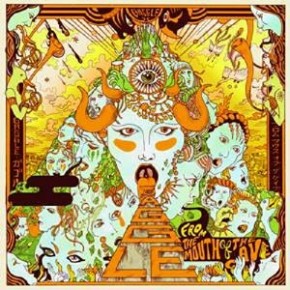 Again, I am rather impressed by Gaggle. Having reviewed ‘Army Of Birds’ I suppose it would be logical to end up hearing it in context. And although ‘From The Mouth Of The Cave’ has its flaws, it is a bold statement from the 21-strong choir, and not only that, but a bloody good listening experience.

Part of what makes ‘From The Mouth Of The Cave’ so enjoyable is that it feels like it was considered as an album, not just a collection of songs. There’s genuine pacing and progress here, from the atmospheric opening track, to the climactic final two five-minute mini epics. The title track sounds like a loping percussive offcut from a sci-fi soundtrack, before the dark, almost gothic horror choral vocals swirl into the mix with a breathtaking impact. This turns into a more songlike beast halfway through, a snarling cross between dub-ish rhythms and the opening credits song for a Guillermo Del Toro film, which reaches a heady intensity by the time the track ends, before unfolding into the single cut ‘Army Of Birds’, which is easily one of the most accessible tracks, with a swaggering hip-hop rhythm backing propping up its intricate and fantastically well-thought-out interwoven vocal parts that come together in a powerful yet catchy clout of melody and danceable rhythms.
‘Power Of Money’, frustratingly, doesn’t quite live up to its predecessor. The deft layering of the group’s vocals and smart percussion remains great as ever, but the dizzying force of Gaggle becomes overpowering in the verses and the overall effect is that the main vocal in the verses feels sonically blurred. Later on, ‘Crows’ manages to pull off a close shave, the less crammed chorus and impressive melodic discipline shown by the group winning out over a little too much happening. Then ‘Gaslight’ really hits its stride, with a chaotic post-techno soul feel woven into the track, like a crowd of Marva Whitney at a club night held by The Slits. An unmissable slice of more instrumentally-inclined intensity from Gaggle, and a startlingly good track that rises into almost unbearable energy levels. Contrasted with this is the sparse percussion/vocals anger of ‘Liar’, which become genuinely scary and retains a clarity that some other tracks lose, meaning the cutting lyrics are clear. ‘Bang On The Drum’ has another grabbing set of lyrics that could have done with a similarly stripped-back approach, as although the bleak electro synth backing works, the vocal stabs muddle the main delivery of what is otherwise another of the album’s standout tracks.
The final two songs bring us back to the dynamic cinema style orchestration and atmosphere, with ‘Hello Spider’ twisting romantic strings into Gaggle’s razor-edged choral style and sprawling percussion until it reaches a swirling pinnacle of sound. ‘Leave The City’ brings back another heady dose of sci-fi synths in a dark waltz that occasionally overdoes the electronic wails but does the job of burying the listener back into the slightly surreal otherworldly feel from which the album emerged.

I’ve never heard anything quite like ‘From The Mouth Of The Cave’, but Gaggle, for all their surface appearance as a gimmick outfit, have proven to this sceptic that they are in actual fact a genuinely formidable musical entity that transcends genre and triumph over flaws. Highly recommended.

Gideon Conn – Take It All